When exploring a big picture concept like FRICTION, it helps to be able to demonstrate and compare different examples. When you can combine interaction with a big visual…it rocks! Leaving a lasting impression that is easy to reference in future lessons!

Have your class sit on both sides of a 3′- 4′ wide aisle on the floor. Tile is best; carpet is not as dramatic. Then, have one helper sit at one end of the aisle while you sit at the other end with the equipment. Talk about hockey: What surface is it played on? (Ice) Point out that you don't have ice but that you have tile/carpet/wood, etc.

Be VERY quiet and listen to the sound the hockey puck makes.

Rub the puck back and forth on the floor a few times then slide it down the aisle to your helper as everyone listens. What did you hear? What did you see? Did it go forever or slow and stop?

Let them make their own assumptions, then introduce the concept of friction. Ask them to rub their palms together really fast. What do they feel?? (Reply: That's hot!) That's from the friction!

Explanation: The first law of thermodynamics says energy is not created or destroyed; it's just changed from one form to another! When moving energy (kinetic) changes to heat energy, there is LESS moving energy! Admit that, although you transferred a lot of energy to the puck with your arm, the puck rubs against the floor as it slides. Eventually it will run out of moving (kinetic) energy and would not have had enough energy to overcome the pull of GRAVITY.

Interesting questions for discussions on friction:

Polish the ice with a Zamboni machine

Freeze pucks and switch out frequently. (Freezing a puck makes it bounce less, since the rubber is more rigid. It also allows it to glide further. If it were warmer than the ice it will melt the ice, and cause more friction.)

Someone had a great idea – let's play hockey on the pavement! Imagine if it makes this (rub puck on floor) sound on a floor, what kind of sound do you think it will make on concrete? The sound is far greater because the rough surface increases the friction and energy is lost, SO much, that there's not much moving energy left.

Someone had a great idea! Listen to the sound THIS makes. Roll ball to helper ( very little sound). Only a tiny bit of the ball is rubbing against the floor at any time, so there's less friction. Will this (indicate ball) give you good practice at puck handling?? NO… it's the wrong size and weight for good practice.

Someone had another great idea! They combined a BALL with a PUCK and came up with THIS (street puck with bearings), Let's see how this travels… roll the street puck across the floor to helper. Students begin to understand the relationship between surface area of the moving object and conditions of the surface it's moving on.

What would happen if there was almost no friction?

Ask this question: Who has ever played air hockey? Display the Air Puck and explain how it creates a cushion of air between the puck and the floor.

What do they think will happen?

Demonstrate by sliding it to your helper. For more interaction, have the group move into a large circle and take turns sliding the puck gently across the circle to each other. Have students keep their hands up until they have had a turn.

What happens if you add weight on top of the Air Puck? 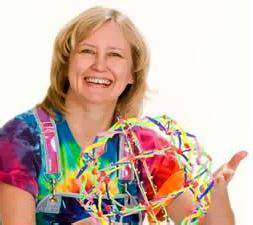 Marcey Walsh boosts the science confidence of thousand of teachers nationally each year! Her fun, interactive staff workshop "Rock Solid Science" explores the five concepts in Physics that are the foundation for every science unit you teach! Check out Highly Contagious Education at

Check out Highly Contagious Education
Click Here to subscribe to the CoolStuff Newsletter and get notified when our next blog is released.