Each October the physics teachers at New Trier High School in Winnetka, Illinois treat their students and the public to a haunted science laboratory. Visitors learn science while having fun as they are confronted with a maze of displays that demonstrate optical, acoustical, mechanical, electrical, and perceptual phenomena in the context of Halloween. Scientists and non-scientists alike become engaged in trying to understand the science behind the fun.

As strange as it may seem, science and Halloween do have something in common: they both exemplify our innate fascination with the mysterious. The concept of a haunted science lab was conceived of over twenty years ago by Creighton University physics professor Tom Zepf. It began as a collection of activities in Light, Color and Lasers, a core-curriculum course he was teaching at Creighton. Gradually the annual Halloween event evolved into laboratory-based experience consisting of over three dozen displays demonstrating a wide range of physical principles, all of which invite interaction.

In the last few years, the concept of integrating science with fright has spread to other educational institutions (e.g., New Trier High School and Deerfield High School, both in Illinois, and Luther College in Iowa). In the process, displays illustrating perceptual concepts have become a part of the annual exhibitions. Like light and color, visual perception lends itself extremely well to the Halloween theme. The inclusion of psychological and physiological phenomena has made the haunted lab relevant to students of psychology and biology while demonstrating connections between the sciences.

We now offer some examples of favorite haunted lab exhibits. The beauty of these displays is that they are based on apparatus found in most science storerooms. With slight modification, many devices commonly used in the traditional science laboratory may be transformed into something spooky.

Key Concept: An object placed at the center of curvature of a concave mirror will produce an inverted real image whose size and distance from the mirror exactly match that of the object.

Based on the standard spherical mirror demonstration, a large concave mirror is used to produce a ghostly apparition in an exhibit we like to call “Mirrorly a Ghost.” An illuminated, inverted plastic ghost is mounted at the center of curvature of a large concave mirror. The mirror forms an erect image of the ghost directly above the object ghost. The illusion is made complete with the addition of arms, shirt cuffs, and a white sheet extending from the image to the floor.

Look at the ghost before you. Is it real or is it virtual? Hint: The actual ghost is located just below the ghostly image you see. Hint #2: A concave mirror is used to produce this spooky illusion. 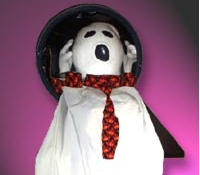 Key Concept: When two pendulums have the same length, they will oscillate at the same frequency. Scientists say that the two pendulums exhibit resonance. If the pendulums are coupled in some way, say by a string, the gentle tugging produced by the connecting string will efficiently transfer energy back and forth between the two pendulums.

Two apples suspended from strings and linked by a string or rubber band can be made to stop on command. Knowing that the apples’ energy is transferred back and forth allows the operator to predict when each apple will stop. 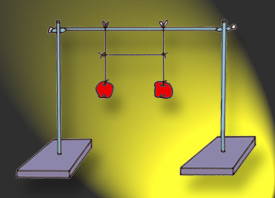 Start one apple swinging by pulling it back a few centimeters. Now carefully watch what happens. Notice that the amplitude of swing of the apple you released is decreasing while the apple initially at rest is starting to move. Will the first apple ever stop swinging? You’ll have to watch and see!

Key Concept: Conservation of energy: Energy cannot be created nor destroyed, only transformed from one form to another.

A pendulum with a pumpkin as a bob is used to demonstrate the conservation of energy. The pumpkin is supported from the ceiling with a rope. A volunteer stands with back against the wall. The pumpkin is brought back to the volunteer’s nose and then released. The trick is to remain motionless with your eyes open as the pumpkin first swings away and then returns.

With your back against the wall, hold the pumpkin so that it just touches the tip of your nose. Now with your eyes wide open, release the pumpkin and wait for it to return. Try not to flinch as the pumpkin comes hurling back at you!

At the heart of this demonstration is the Mirage. The device consists of two inward facing concave mirrors with identical focal lengths. The two mirrors fit together forming a shape reminiscent of a flying saucer. The ghost, placed on the surface of the lower mirror, produces a real image in the plane of a hole cut in the upper mirror.

Ghosts are untouchable and this exhibits proves it! A tiny ghost figurine is seen perched on top of what appears to be two bowls inverted on each other. When you attempt to touch the ghost, your fingers go right through it!

Key Concept: Anamorphic images are purposely distorted and require a cylindrical mirror to make them intelligible.

Anamorphic images of ghosts, goblins, and other things that go bump in the night may be produced using computer graphics programs. For example, Print Artist from Sierra allows you to wrap images into the required semicircular shape. This program also has a library containing many Halloween images.

We encourage you to have your students produce their own Anamorphic Halloween images using the grids found at our link. Instruct them to first draw a picture on the rectangular grid. Then tell them to transfer their drawing, point by point, onto the cylindrical grid. As they do so, their image will become distorted. However, it will appear normal when viewed with a cylindrical reflector.

Key Concept: The eye-brain system is conditioned to interpret all faces as convex even when they are not. Since we virtually never encounter a concave face, we tend to see what we believe rather than believe what we see.

This reverse mask illusion relies on our expectations. We tend to see what we have learned to see, in this case a convex face. You may wish to have your students experiment with lighting. Suggest that they try illuminating the mask from both top and bottom and from behind if the mask you are using is translucent. We are accustomed to seeing the subtle shadows produced when convex faces are illuminated from above. The same shadowing results when light from below shines on a concave face. Light passing through the mask will produce a similar precept.

Stand a few feet away from the mask. With one eye closed, look at the mask. Does the mask appear concave or convex? Now open both eyes. Does the mask continue to look convex? Finally, with both eyes open, move from side to side. Can you escape the gaze of the mask?

Key Concept: Gas molecules that fill the globe are stripped of their electrons by electromagnet waves emitted by a transmitter at the bottom of the globe. An eerie discharge is produced when the electrons recombine with the ionized gas molecules.

Change the electrical discharge pattern by gently touching the glass with your fingers. Placing your hand on the sphere may reveal the lines in your palm.

Key Concept: An image is visible when focused light is reflecting off of something. Also, the brain retains images for a fraction of a second in an effect known as Persistence of Vision.

Focus a 35 mm slide of your choice (I like to use a ghost image) on a sheet of white paper hung in the middle of the room. After obtaining a sharp image, remove the paper. Use a tape line on the floor to indicate the position of the paper. Students will rapidly swing a long dowel rod up and down in the area previously occupied by the paper. The dowel will reflect the focused ghost image one bit at a time, and the fast swinging will cause the whole image to persist in the observer's brain.

Hold the "Magic Wand" in your hand and wave it rapidly up and down over the tape line on the floor. Look at the side of the wand that faces the projector. What do you see? Wave the wand faster and slower. When can you see the whole image at once? What happens to the image when you stop waving the wand?

Combine a tablespoon of Phantom Crystals and 2 liters of water in a large beaker or bowl. Let them soak overnight. The result should look like plain water.

What do you see? Put your hand into the container of Ghost Brains. What do you feel? 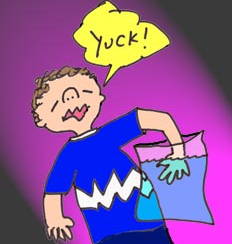 This exhibit is relatively easy to set up and well worth the effort. A toy skeleton, or any other object for that matter, is attached to the shaft of a slow turning motor. Using a 35 mm slide projector, the shadow of the rotating skeleton is projected on a translucent screen. A blank artists canvas works beautifully.

Stare at the shadow of the rotating skeleton. You will notice that the skeleton appears to be rotating in one direction, and then, all of a sudden, will appear to rotating in the opposite direction. However, it’s all in your head. The plastic skeleton casting the shadow always rotates in the same direction.