As I was watching a kayak quietly slip under the Ponte Vecchio in the morning light, I was thinking what it must have been like for Galileo Galilei while living and teaching in Florence, Italy, looking down every day at the beautiful Arno River. In Galileo's time, the Ponte Vecchio bridge, the ONLY bridge in Florence to survive the bombings of WWII, was populated by butcher shops with meat cutters throwing the leftovers into the Arno River. 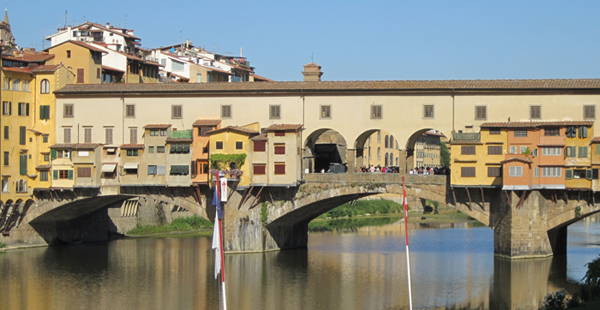 While the other members of my family shopped on the famous Ponte Vecchio bridge, now replaced with gold and diamond jewelry shops, I was first in line to see the gold standard in science museums, Museo Galileo or the Galileo Museum.

It was 8:45 AM in Florence, and I was waiting for one of the highlights of my 2012 Italian family vacation, which was the chance to see the resting place of original creations from one of the greatest minds of the 16th century. Like a little kid waiting in line for the newest roller coaster at Disney World, I stood by the door with eager anticipation, excited to finally see in person what I had only seen in college textbooks or on YouTube. As the door opened at 9:30 AM, I paid my 9 Euros and raced up the stairs with great anticipation. 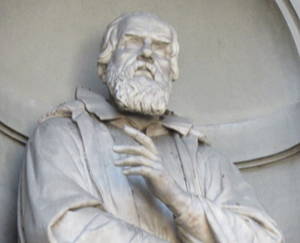 When entering the Galilean room, you are met by three glass-enclosed bell jars that house probably the oddest, yet eeriest of all the displays of the museum, Galileo himself! Because of Galileo's status as a revered scientist and statesman, grave robbers and souvenir seekers wanted remembrances of the famous scientist and raided his remains. Preserved under glass, in what could only resemble a saint's reliquary, are Galileo's vertebrae, molar, thumb, and middle finger. An ironic gesture to the world that he was right all along about the motion of the Earth and its place in the solar system. This item exemplifies the celebration of Galileo as a hero and martyr of science.

Displayed on the first wall was one of the most famous of all of Galileo's experiments, the Inclined Plane. This apparatus used five small bells, along with a pendulum to provide an experimental demonstration of the Galilean law of falling bodies. The Law was demonstrated with the pendulum connected to the inclined plane, acting as a "timepiece". The experiment consisted of releasing a ball from the top of the plane at the same time as the pendulum was swung. For each complete period of the pendulum, the ball would strike one of the small bells placed along the inclined plane at increasing distances, specifically arranged in the order of odd number distances. The experiment made it possible to measure the increase in the distances traveled by the ball as it rolled through equal time intervals starting from the rest position. The ringing bells would also provide an additional auditory observation of the ball's constant acceleration during its fall.

In the background of the Inclined Plane was the Brachistochronous, an apparatus demonstrating the observable effects of a physical principle discovered by Galileo on November 29, 1602. Using geometrical methods, Galileo proved that a body takes less time to fall along the arc of a circumference than along the corresponding chord, even though the latter is a shorter path. The device consisted of a wooden frame with a cycloidal channel and a straight channel which was adjustable by means of pegs fixed in holes with brass rings under the cycloid. By dropping two balls simultaneously down the two channels, he was able to observe that the ball falling down the circular channel reaches the bottom well before the ball traveling down the inclined plane. 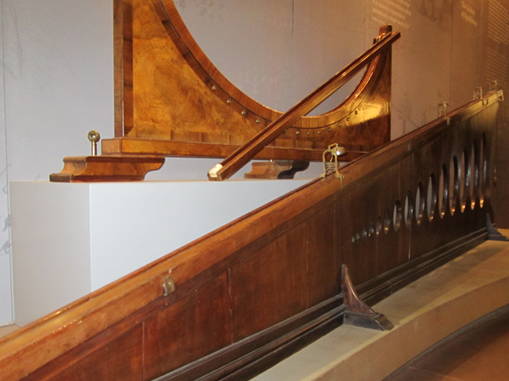 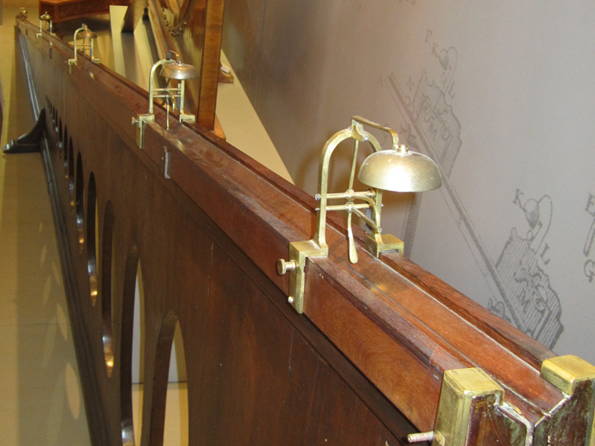 On the far wall was the original telescope made by Galileo consisting of a main tube with separate housings at either end for the objective and the eyepiece. The tube was formed by strips of wood joined together and covered with red leather and gold trim. The plano-convex objective, with the convex side facing outward, had a diameter of 37 mm with a focal length of 0.980 meters and magnification of 21X. However, the original eyepiece was lost. In 1611, Prince Federico Cesi, founder of the Accademia dei Lincei, suggested calling this instrument telescopio [from the Greek tēle ("far") and scopeo ("I see")]. Galileo designed ingenious accessories for the telescope's various applications. Among those were the micrometer, an indispensable device for measuring distances between Jupiter and its moons, and the helioscope, which made it possible to observe sunspots through the telescope without risking eye damage.

On the far wall of the Galilean chamber was a gorgeous wooden instrument used for studying Horizontal Projectile Motion. A ball would be rolled from the top of the cycloidal ramp, exit the ramp and pass through a series of metal rings placed in a parabolic pattern, all driven by inertia and gravity. It is well-known that Galileo studied projectile motion and its effect on the motion of an object on Earth. His writings are well known and illustrate his fascination with the motion of falling bodies.

What is amazing is that students STILL study projectile motion in the same way as Galileo did some 400 years ago. Although not as artistically designed as Galileo's version, the modern-day aluminum Horizontal Projectile Ramp still demonstrates the laws that govern horizontal projectile motion.

Museo Galileo showcased Galileo's accomplishments throughout his life; his writings, his works, original devices and famous experiments, which allowed many scientists to build their theories upon.

The museum's remaining rooms exhibited numerous other scientists' work and laboratory equipment. What I found absolutely fascinating was that the demonstrations used in today's classrooms bear a strikingly similar appearance to what our predecessors used in their labs. The more equipment I saw, the more I said to myself "Wait, I use that in my classroom!" or "That looks just like the lab I did with my students last year!". I realized that I was REALLY playing in Galileo's Lab! 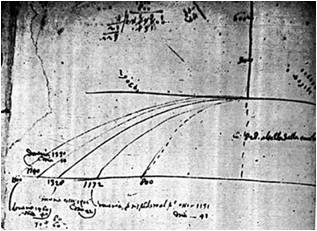 Given the equipment in the museum and the writings of the various scientists, I could have brought my class to Florence and had no problem teaching Physics in the SAME way I always had. One device after another would demonstrate a Physics concept in the same manner that I might have done it. Then I knew why, the very devices we "modern-day" Physics teachers are showing to our students, actually thinking that these are unique demonstrations that few have seen before, except in a catalog, are really 400 years old! The following are many of the devices that I saw that day at the museum and after taking pictures of them, I tried to think of a cool way to prove my earlier point: that our modern day Physics demos and device are frighteningly similar to their 400 year-old counterparts. Here are a few I encountered… 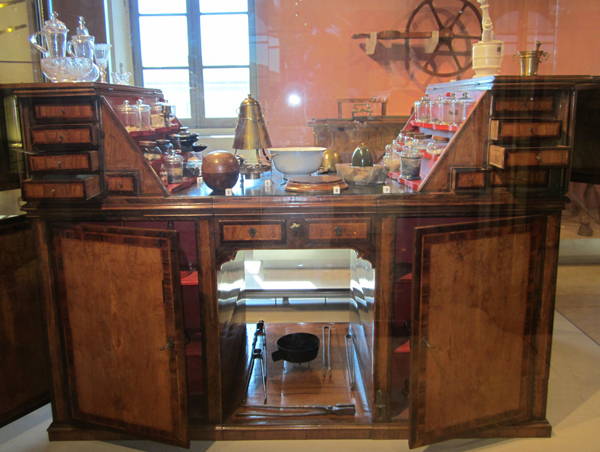 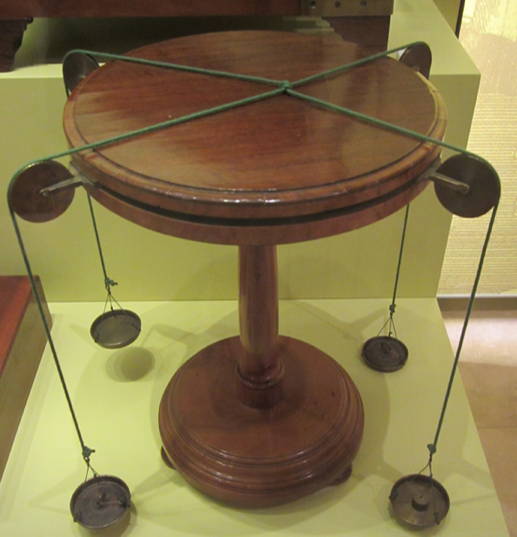 Set of armed lodestones used by Galileo for his studies on magnets (1600-1609). These DEFINITELY look "armed"! 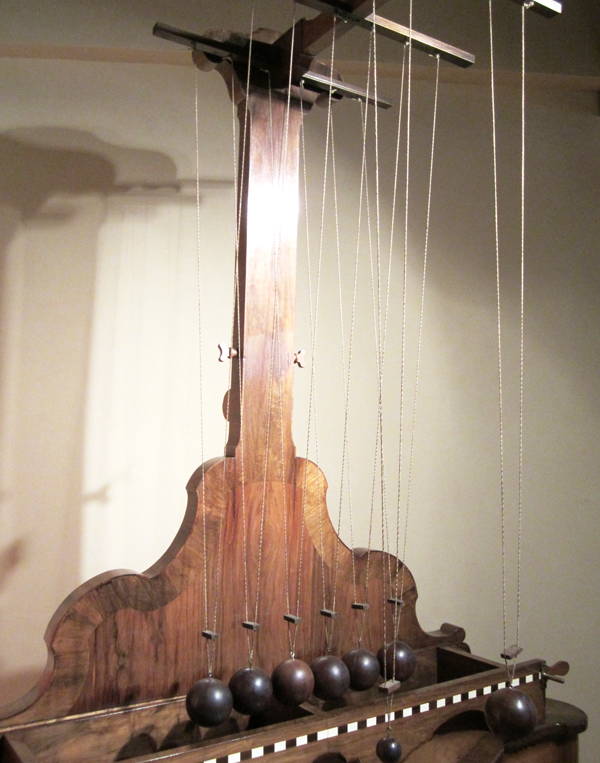 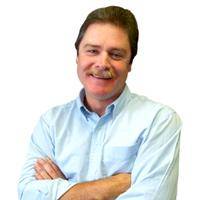 Buzz Putnam, Physics Teacher, Whitesboro, New York
Buzz is a 25 year veteran Physics and Nanotechnology teacher who has served as Whitesboro High School's Science Department Chair since 1997. Buzz also conducts Teaching Methods classes for science teachers at Utica College of Syracuse University. In addition, he is part of the Cornell University Laboratory Development Team and a member of the Cornell NanoScale Institute for Physics Teachers. He is also a frequent presenter at NY, NJ, Texas and National Science Teachers Association Conferences and has won numerous teaching awards throughout his career.