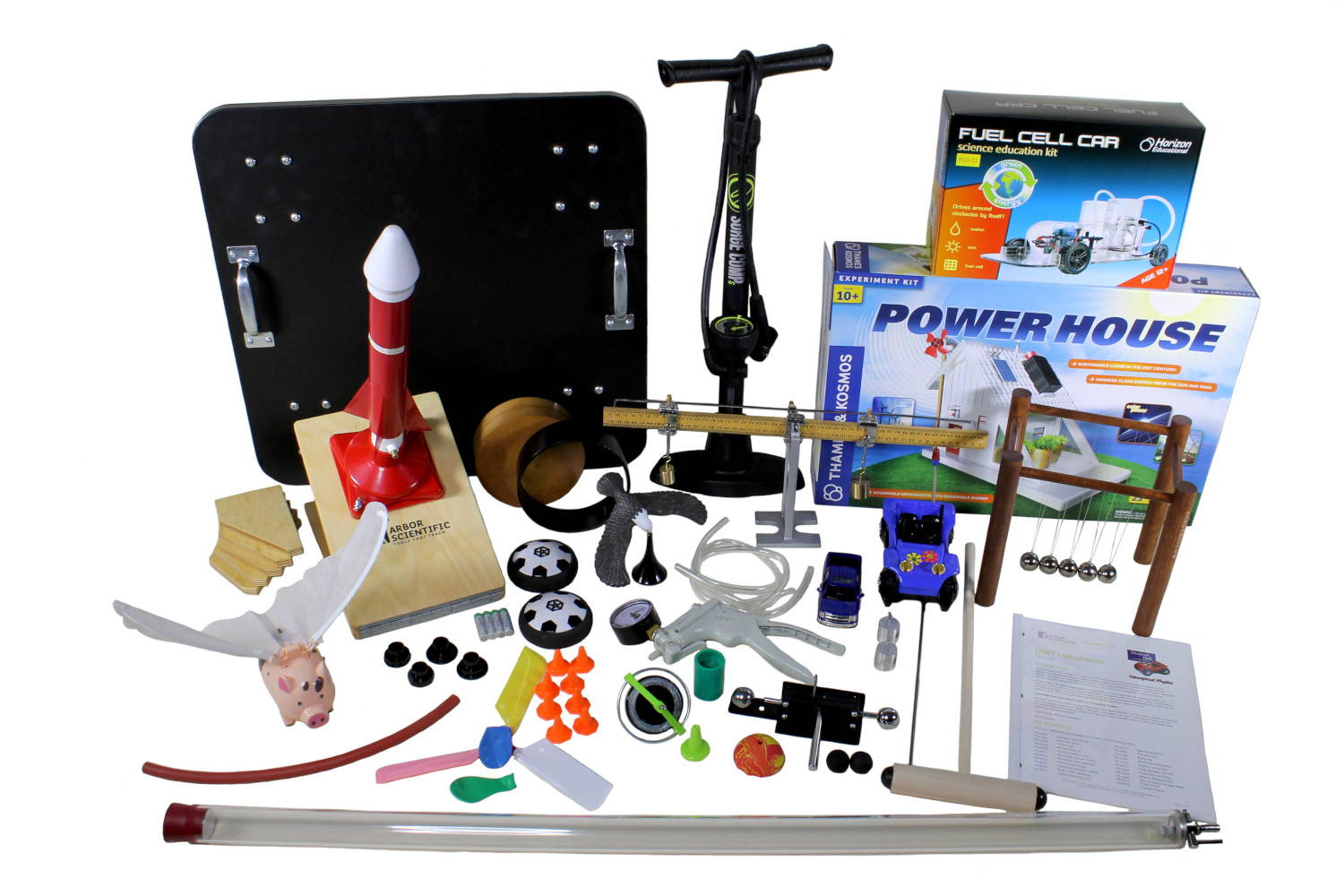 Students learn best when they DO, not just listen or read or watch. In keeping with the adage, "I hear and I forget. I see and I remember. I do and I understand!" When we are physically active with physical equipment relevant to the concepts to be learned, we simply learn better to nobody's surprise!

Using your Lab Manual or downloaded Guiding Worksheet, select the labs for which you wish to select supplies. Clicking on the lab title will open a new window with the specific items needed for that activity. Multiply quantities to accommodate the number of student lab groups in your class.

Step 1. Download and print the Guiding Worksheet and organize the labs and topics your classes will cover.

Step 2. After reviewing and making decisions using the Guiding Worksheet, select each lab from the menu below to make selections of needed equipment.

Step 3. Each lab selection will open a new window for that lab. After you have completed your choices for the lab, close the window and return to this page for further selections.

1: Amassing a Penny's Worth - Formulate a hypothesis, accumulate data, and then develop a conclusion.

2: Smart Ropes - Explore mechanical equilibrium.
3: 24-Hour Towing Service - Find a technique for moving a car when its wheels are locked.
4: Sail With the Wind - Investigate the relationship between the components of force that propel a sailboat.
5: Weight of a sign - To resolve a force vector into horizontal and vertical components.

6: Going Nuts - Explore the concept of inertia.
7: Buckle Up! - Investigate how Newton's law of inertia is involved in collisions.

8: The Physics 500 - Compute the average speed of at least three different races and to participate in at least one race.
9: The Domino Effect - Maximize the speed of falling dominoes.
10: Reaction Time - Measure your reaction time.
11: Merrily We Roll Along! - Investigate the relationship between distance and time for a ball rolling down an incline.
12: Blind As a Bat - Produce and compare graphs of different motions.
13: Bring Home the Bacon - Investigate the motion of an object as it rolls down an incline.
14: What a Drag! - Effects of Air Resistance
15: Impact Speed - Estimate the speed of a falling object as it strikes the ground.

16: Bull's Eye - Predict the landing point of a projectile
17: Anatomy of a Homer - Understand the principles of projectile motion by analyzing the physics of home runs.

26: Making the Grade - Investigate the force and the distance involved in moving an object up an incline.
27: Muscle Up! - Determine the power that can be produced by various muscles of the human body.
28: Cut Short - Illustrate the principle of conservation of energy with a pendulum.
29: Conserving Your Energy - Measure the potential and kinetic energies of a pendulum in order to see whether energy is conserved.
30: Wrap Your Energy in a Bow - Determine the energy transferred into an archer's bow.
31: How Hot Are Your Wheels? - Measure the efficiency of a toy car on an inclined track.
32: Releasing Your Potential - Find quantitative relationships among height, speed, mass, kinetic energy, and potential energy.
33: Slip-Stick - Investigate three types of friction and measure the coefficient of friction for each type.

34: Going in Circles - Determine the relative magnitude and direction of acceleration of an object at different positions on a rotating platform.
35: The Flying Pig - Show that the net force for a conical pendulum is mv2/r.
36: Torque Feeler - Illustrate the qualitative differences between torque and force.

37: Where's Your CG? - Locate your center of gravity.
38: Weighing an Elephant - Determine the relationship between masses and distances from the fulcrum for a balance seesaw.
39: Solitary Seesaw - Identify the forces, lever arms, and torques for a system in a rotational equilibrium.
40: Keeping in Balance - Use the principle of balanced torques to find the value of an unknown mass.

41: Rotational Derby - Observe how round objects of various shapes and masses roll down an incline and how their rotational inertias affect their rate of rotation.
42: On or Off the Mark? - Explore conservation of energy for a rolling body.

43: Apparent Weightlessness - Observe the effects of gravity on objects in free fall.
44: Getting Eccentric - Investigate the geometry of an ellipse.
45: Tracking Mars - Employ the technique of Johannes Kepler in plotting the orbit of Mars using data acquired by Tycho Brahe four centuries ago.

46: Trial and Error - Discover Kepler's third law of planetary motion through a procedure of trial and error using a computer.

Chapter 17 - The Atomic Nature of Matter

49: Stretch - Verify Hooke's law and determine the spring constants for a spring and a rubber band.
50: Geometric Physics - Investigate ratios of surface area to volume.

51: Eureka! - Explore the displacement method of finding volumes of irregularly shaped objects and to compare their masses with their volumes.
52: Sink or Swim - Introduce Archimedes' principle and the principle of flotation.
53: Float a Big Stick - Investigate how objects float by analyzing forces acting on a floating stick.

59: Cooling Off - Compare the rats of cooling of objects of different colors and surface reflectances.
60: Solar Equality - Measure the sun's power output and compare it with the power output of a 100-watt lightbulb.

61: Boiling is a Cooling Process - Observe water changing phase as it boils and then cools.
62: Melting Away - Measure the heat of fusion for water.
63: Getting Steamed Up - Determine the heat of vaporization for water.
64: LN is Cool Stuff - Determine the specific heat of brass and the heat of vaporization of nitrogen.
65: Work for Your Ice Cream - Measure the energy transfers occurring during the making and freezing of homemade ice cream.
66: The Drinking Bird - Investigate the operation of a toy drinking bird.

67: The Uncommon Cold - Use linear extrapolation to estimate the Celsius value of absolute zero.

68: Tick-Tock - Construct a pendulum with a period of one second.
69: Grandfather's Clock - Investigate how the period of a pendulum varies with its length.
70: Catch a Wave - Observe important wave properties.
71: Ripple While You Work - Observe wave phenomena in a ripple tank.

72: Mach One - Determine the speed of sound using the concept of resonance.

75: Flaming Out - Observe the spectra of some metal atoms.
76: Why the Sky is Blue - Investigate the mechanism that causes light to scatter.

77: Images - Formulate ideas about how reflected light travels to your eyes.
78: Pepper's Ghost - Explore the formation of mirror images by a plate of glass.
79: The Kaleidoscope - Apply the concept of reflection to a mirror system with multiple reflections.
80: Funland - Investigate the nature, position, and size of images formed by a concave mirror.

81: Camera Obscura - Observe images formed by a pinhole camera and compare images formed with and without a lens.
82: Thin Lens - Explore convex and concave lenses.
83: Lensless Lens - Investigate the operation of a pinhole "lens."
84: Air Lens - Apply knowledge of lenses to a different type of lens system.
85: Bifocals - Investigate the nature, position, and size of images formed by a converging lens.
86: Where's the Point? - Measure the focal length of a diverging lens.

87: Rainbows Without Rain - Observe and develop a hypothesis about the phenomenon of light interference.
88: What's My Lambda? - Use the basic principles of diffraction and interference to measure the wavelength of laser light.

91: Sparky, the Electrician - Study various arrangements of a battery and bulbs and the effects of those arrangements on bulb brightness.
92: Brown Out - Investigate charging and discharging a capacitor.
93: Ohm Sweet Ohm - Investigate how current varies with voltage and resistance.

94: Getting Wired - Build a model that illustrates electric current.
95: Cranking Up - Observe and compare the work done in a series circuit and the work done in a parallel circuit.
96: 3-Way Switch - Explore ways to turn a lightbulb on or off from either one of two switches.

99: Motors and Generators - Observe the effects of electromagnetic induction.

100: Particular Waves - Observe the photoelectric effect.
101: Energy of a Photon - Determine the energy of a photon emitted by an LED and estimate the value of Planck's constant.

102: Nuclear Marbles - Determine the diameter of a marble by indirect measurement.
103: Half-Life - Develop an understanding of half-life and radioactive decay.