A Visit to Isaac Newton's Home

When I visited England this summer, I had the opportunity to walk in Isaac Newton's footsteps at his birthplace, Woolsthorpe Manor.

It is a little tourist museum far from the major train stops. You will probably have to take a long taxi ride from the train station at Grantham, but it's not so far from London that it's more than a day trip. Woolsthorpe means wool farm, and it still is a wool farm where you can find long-haired Lincoln Sheep grazing in the meadows.

On the way to Woolsthorpe Manor

It is everything you would imagine a farm in the idyllic English countryside to be, with lightly rolling green hills, a stone cottage, and barns. The home and birthplace of Isaac Newton still stands as it did during his lifetime: a proud stone cottage with many adjacent stables and farm houses. Today, every part that is not empty is a museum. 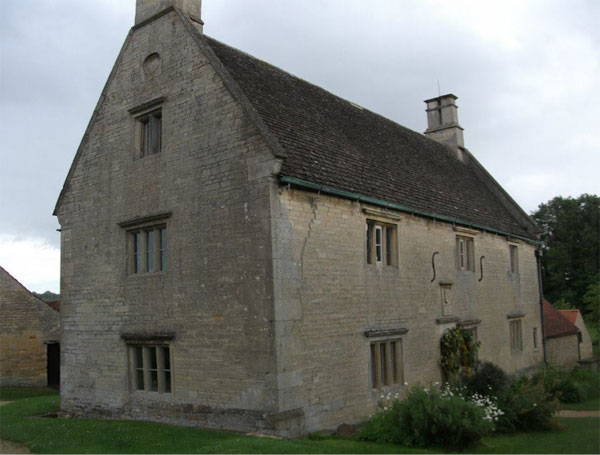 During the plague years, 1665-1666, Newton fled his college at Cambridge and retired home to his mother's stone cottage beside a grove of apple trees. He was a self-taught student of mathematics, and by the time he returned, he was the top mathematician in Europe.

It was in the apple orchard here in Woolsthorpe that Newton developed his Three Laws of Motion and Law of Universal Gravitation. The apple tree that inspired the latter is supposedly still growing here. It is gnarled with age but still gives apples.

The markers tell the story of how the tree that inspired the young Newton's gravity theory fell victim to gravity itself during a major storm.

At well over 400 years old, this tree miraculously still bears apples and inspires those who make the pilgrimage. As the sunlight broke through the clouds and the birds sang far from the city sounds it was easy to imagine what this place was like in Newton's time and how one could think clearly here.

The peace stretches far across the land, and there is a contemplative feeling in the air; it seems like a place where there is nothing much to do except think of ideas.

Young Newton often neglected his farm duties, such as mending fences and tending to the sheep, in favor of reading and experimenting. His father passed away before he was born, and his mother remarried and left him in the care of his grandmother. These stories and others can be learned while visiting the museum that was his home.

The main building itself has five rooms, and these are decorated in the style of the era, with signs and exhibits throughout. There is even a little hands-on science museum where visitors can try out some of the classic experiments associated with Isaac Newton.

Also on site, you will find a human sundial, a place for a picnic, and the famous experiments on optics that were Newton's other great contribution to physics. There are prisms, reflecting telescopes, and light color mixers.

When Newton came of age, he left the countryside to attend Trinity College in Cambridge. Here, you can find cloned relatives of his apple tree, grafted, through vegetative propagation. One of the trees is in the Cambridge University Botanic Garden.

Cambridge is a great day trip too, and Trinity College is beautiful, thanks to King Henry VIII's money. Near the front gates you will find another apple tree, right outside Newton's office, where he lived and worked as a research professor for almost 30 years.

So where is Sir Isaac Newton now?

Some of his books and locks of his hair can be found at Cambridge and Woolsthorpe. Even a copy of his death mask resides at Woolsthorpe. The memorial and grave of Sir Isaac Newton is at Westminster Abbey in London. This is not far from where he was president of the Royal Society of London. Which also has markers that honor their famous former president. 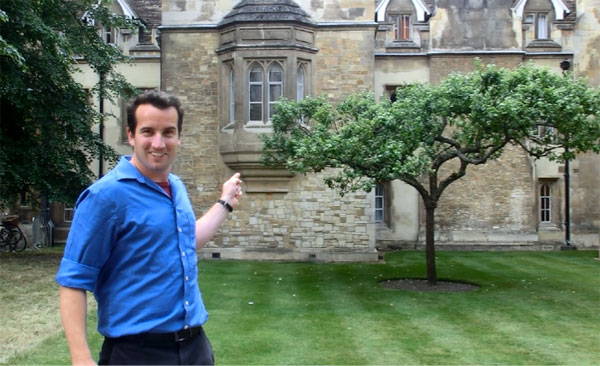 Of all the sights, none can equal the quiet, contemplative air of the orchard in front of the stone cottage at Woolsthorpe Manor. As a physicist, this is truly a place for spiritual fulfillment.

It was during the plague years, that Newton escaped here and was inspired to write his Laws of Motion and Theory of Universal Gravitation. Spend an afternoon here and you too, may have a great idea. 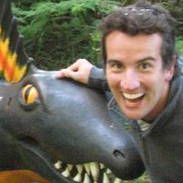