Each new school year offers endless possibilities for igniting student interest in science. The principles students study in your classroom touch every aspect of their lives. Seeing the science involved in everything from a rainbow to a rock concert can be rewarding and enjoyable; having an understanding of the underlying physical principles behind these phenomena serves to heighten these experiences even more. Such consciousness-raising can enrich your students’ lives just as an appreciation of art and music can expand their horizons.

Science students have an opportunity to interrogate nature directly through experimentation. As science teachers, we should take full advantage of this aspect of our discipline and allow students as many hands-on experiences as possible. While the laboratory is the traditional arena for such inquiry-based activities, a host of alternative venues exist.

The following activities are, for the most part, to be performed outside the classroom. They are intended to provide students with an awareness, appreciation, and understanding of the myriad phenomena that surround them.

Now that you have seen seen the Diet Coke and Mentos geyser video, here's the science behind the reaction. When a Mentos mint is dropped in a 2-liter bottle of Diet Coke, a tremendous amount of carbon dioxide gas is released in an instant, resulting in an eruption of soda. Most students and teachers speculate that the effect is caused by a chemical reaction between the mint and the carbon dioxide-rich soda. However, based on research findings, this explanation is not correct. As it turns out, the root cause of the reaction is physical, not chemical.

Scratches on the surface of a Mentos mint can serve as nucleation sites, places where the carbon dioxide gas can form bubbles. Since there are so many of these sites on a Mentos, the gas comes out of solution extremely rapidly. The effect is magnified by the fact that a Mentos is denser than Coke. As it sinks, it comes into contact with liquid from the top to the bottom of the bottle. The sudden increase in pressure that results from the rapid release of gas forces the soda out of the bottle.

The question is: will other sodas and other candies produce similar results? This is where experimentation comes in. While a wide range of combinations have been tried, most of which can be seen in Internet videos, having students do a series of controlled experiments could teach them much about how science is done. Controlling variables, making measurements of geyser height, recording, sharing and analyzing data, and drawing conclusions can all be done either in school or at home.

1. Taking the Science Classroom into the World

The world outside the classroom provides endless possibilities for discovering and understanding nature’s laws. Through experiments and exploratory activities performed in non-traditional settings, students of all ages can be made aware of the beauty and wonders of science. Furthermore, such experiences make evident the examples and applications of science in everyday life.

The key concept is that students will use the concept of similar triangles to indirectly measure the diameter of the moon. This activity can be done in the classroom, if the moon happens to be visible from your windows, or it can be done at home by each student.

You may find this hard to believe, but you can measure the diameter of the moon from the comfort of your home. The equipment needed includes an index card, a pin, two strips of opaque tape (masking or electrical tape works well), and a centimeter ruler.

2. Science to Go: Doing Science with Family and Friends

Why not let your students share the fun and excitement of science with their family and friends? Using simple and safe materials, students may do a wide variety of science experiments at the kitchen table or in the backyard.

The benefits of at-home science activities are many. They increase the time students are thinking about and doing science. Since many of the explorations focus on counterintuitive phenomena, students delight in sharing unexpected outcomes with others. Needless to say, parents love seeing what their children are doing in school.

Can you identify this eerie-looking object? If you guessed UFO, you’d be wrong. It’s a Wint-O-Green Lifesaver being crushed with a pair of pliers in a dark room. Referred to as the “electric Life Saver effect” by some people, the phenomenon was first observed over 400 years ago. 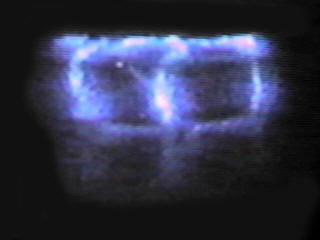 Officially known as triboluminescence, the luminescent effect is the result of a two-step process. First, the crushing of the mint causes some the positive and negative particles in the sugar crystal to separate. As these charged particles recombine, they may collide with nitrogen molecules in the surrounding air. Energized by the collision, the nitrogen molecules emit both visible and ultraviolet light according to its emission spectrum. However, the visible light produced is of low intensity and difficult to see. This is where the wintergreen comes in. The ultraviolet light causes the methyl salicylate in the wintergreen flavoring to fluoresce, which creates a blue glow. Once your eyes have adjusted, this light is bright enough to be seen in a very dark room.

Students can experiment with a variety of mints to see which work and which don’t. Among other things, they will find that both pink Necco wafers and wintergreen Certs produce results similar to those obtained with Wint-O-Green Lifesavers. Both of these mints contain sugar and wintergreen. (Note: Students love to see their mouths light up as they crush the Lifesavers between their teeth. This procedure is not recommended since it could necessitate a trip to the dentist.)

Quite often the materials needed to investigate physical phenomena at home may be found in the kitchen or workshop. When more specialized equipment is needed, create a "Lab in a Bag" by packing required materials in a plastic food-storage bag. Using the “Lab in the Bag” approach, students take home simple materials relating to a given concept in Zip-Loc® bags. Everything needed to investigate phenomena ranging from electromagnetic radiation to Newton’s Laws is contained in a single plastic bag.

Prior to presenting the students with their first activity, send a letter home to parents explaining the purpose and nature of the activities. The letter might also inform parents that their child will receive credit upon the return of a signed sheet indicating the parents’ or guardians’ involvement in the activity.

This activity is a hands-down favorite of our students! The resulting kaleidoscopes are absolutely stunning! Students often give their finished kaleidoscopes to family members and friends as gifts. The simplest kaleidoscope is constructed by simply taping the three mirrors together with masking or electrical tape. The mirrors are placed face down and the tape is applied over small gaps left between the mirrors. These spaces allow the mirror assembly to be folded into a triangular shape. Without the gaps, the mirrors will bind. 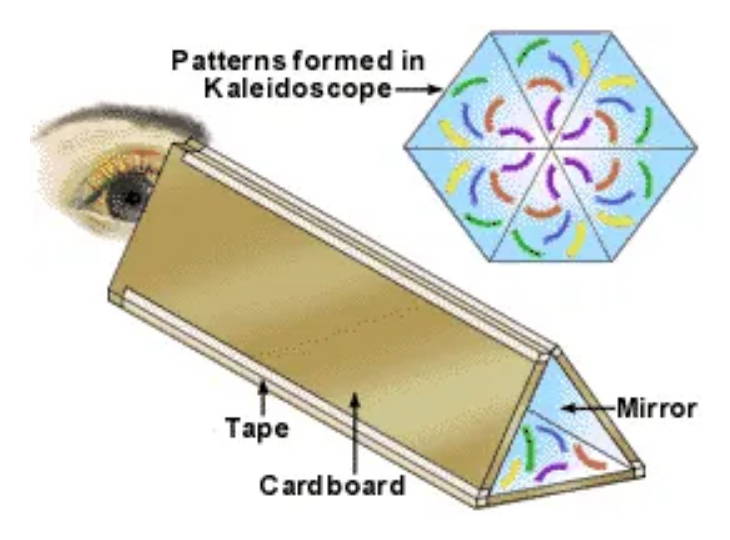 Science is too interesting to keep it cloistered in the classroom! For almost 30 years, we have been sharing the wonders of nature with others in our school through the use of display cases and exhibits located outside the classroom. While doing science in the hallway or other non-traditional settings may seem a bit unorthodox, this form of informal education beckons members of the entire school community to learn just how interesting and enjoyable science can be.

Our first involvement in hallway science displays occurred when we realized that the primary use of our school’s display cases was to store and display trophies. Many cases were not used at all. It occurred to us that we might be able to use these showcases as extensions of the classroom. Our very first effort revealed that a science showcase attracts both science students and non-students alike. In fact, we learned that the display case is an excellent way of introducing non-science students to the wonders of the various scientific disciplines. Students often spend their passing periods trying to understand some phenomenon that to them seems paradoxical or a violation of common sense.

Interactivity is the key to a good display. Doing, not just looking and reading, engages both hands and minds. Furthermore, the more open-ended an activity, the better. Individuals should be able to view the apparatus as a vehicle of discovery and feel free to ask, “what will happen if I do this or that.” As you’ll see, even displays behind glass can be interactive.

The following examples of hallway exhibits and display cases have been very popular with our students. While inexpensive and simple to build and use, they have provided hundreds of students of all ages with a great deal of pleasure and perhaps a desire to learn more about the wonderful world in which they live. Hopefully, these exhibits will get you thinking about ways of decking your halls with science! 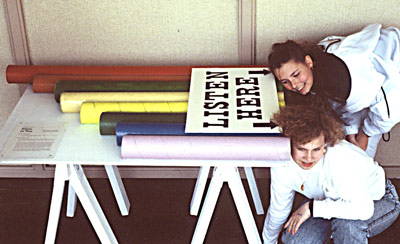 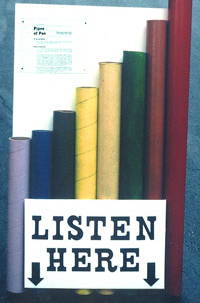 A trip to the carpet store was the genesis of the giant ambient noise resonators or Pipes of Pan, as they are sometimes called. Eight carpet tubes mounted on a plywood base became the basis for a rather strange musical instrument. Based on the principle of resonance, the air in each tube vibrates with a frequency determined by the length of the tube. The background noise in a room contains virtually all audible frequencies, and is capable of creating resonant vibrations in each of the tubes.

We simply put our Pipes of Pan in our school’s central hallway and allow people to explore. A sheet with suggestions for use and a brief explanation of the apparatus is provided. Needless to say, the unusual musical instrument is almost always in use.

To make your own Pipes of Pan, ask your local carpet installer for carpet tubes. The carpet tubes should have a combined length of at least 8 m (roughly 24 ft). This length allows for loss that will occur during cutting. The tubes should be cut to the lengths in the chart below. The chart also shows the corresponding note and resonant frequency for each tube. The tubes may be painted (optional) and attached to a sheet of plywood with small bolts. The tubes may also be simply placed on a tabletop with end stops to prevent rolling.

This Exploratorium-inspired exhibit is visual ambiguity set in motion. As you stare at the shadow of a slowly rotating cube, you notice that it mysteriously appears to reverse its direction of rotation. A quick check of the actual cube reveals that its motion is unchanging. What gives?

Rotational ambiguity arises when the three-dimensional cube is compressed to a two-dimensional projection, removing important visual cues. Finding either direction of rotation equally acceptable, the mind perceives the cube to rotate in one direction, then the other. 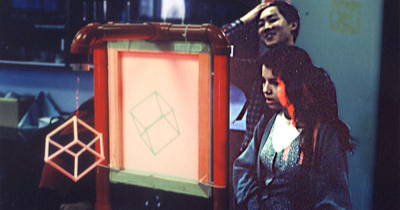 As the photo indicates, the exhibit is very simple. A cube fashioned from balsa or soda straws is suspended from a slow turning motor. A slide projector is used to form a shadow of the cube on a translucent screen. Our screen is made of muslin. PVC pipe may be used to form the support for the screen and the motor, but ring stands also work quite well. Two ring stands support the muslin screen while a third ring stand and clamp hold up the motor and cube assembly.

This device may be modified slightly for Halloween. Replacing the cube with a dangling plastic skeleton adds an additional creepy element to an already eerie display.