Equation for the rotational inertia of a system of particles.

Equation for the rotational form of Newton's Second Law of Motion.

Equation for the translational form of Newton's Second Law of Motion.

Let’s look at another set of demonstrations to learn about rotational inertia. As in the previous demonstration, on the right, we have a 100 g mass hanging from the largest pulley and all four adjustable masses far from the axis of rotation. On the left, all four adjustable masses are still far from the axis of rotation, however, the 100 g mass is hanging from the smallest pulley instead. In other words, both rotational inertia demonstrators have the same rotational inertia and the force of gravity acting on the string is the same, however, the net torque acting on each demonstrator is different. Recall torque equals the “r” vector times the force causing the torque times the angle between the direction of the “r” vector and the direction of the force. The magnitude of the “r” vector is the distance from the axis of rotation to where the force is applied to the object. Because the 100 g mass is hanging from the small pulley on the left and the large pulley on the right, the “r” vector for the small pulley is smaller and therefore the net torque acting on the demonstrator through the small pulley is less. Therefore, according to the Rotational Form of Newton’s Second Law of Motion, the angular acceleration of the demonstrator on the left is less than the angular acceleration of the demonstrator on the right.

This equation explains why the demonstrator on the right accelerates more quickly than the one on the left. 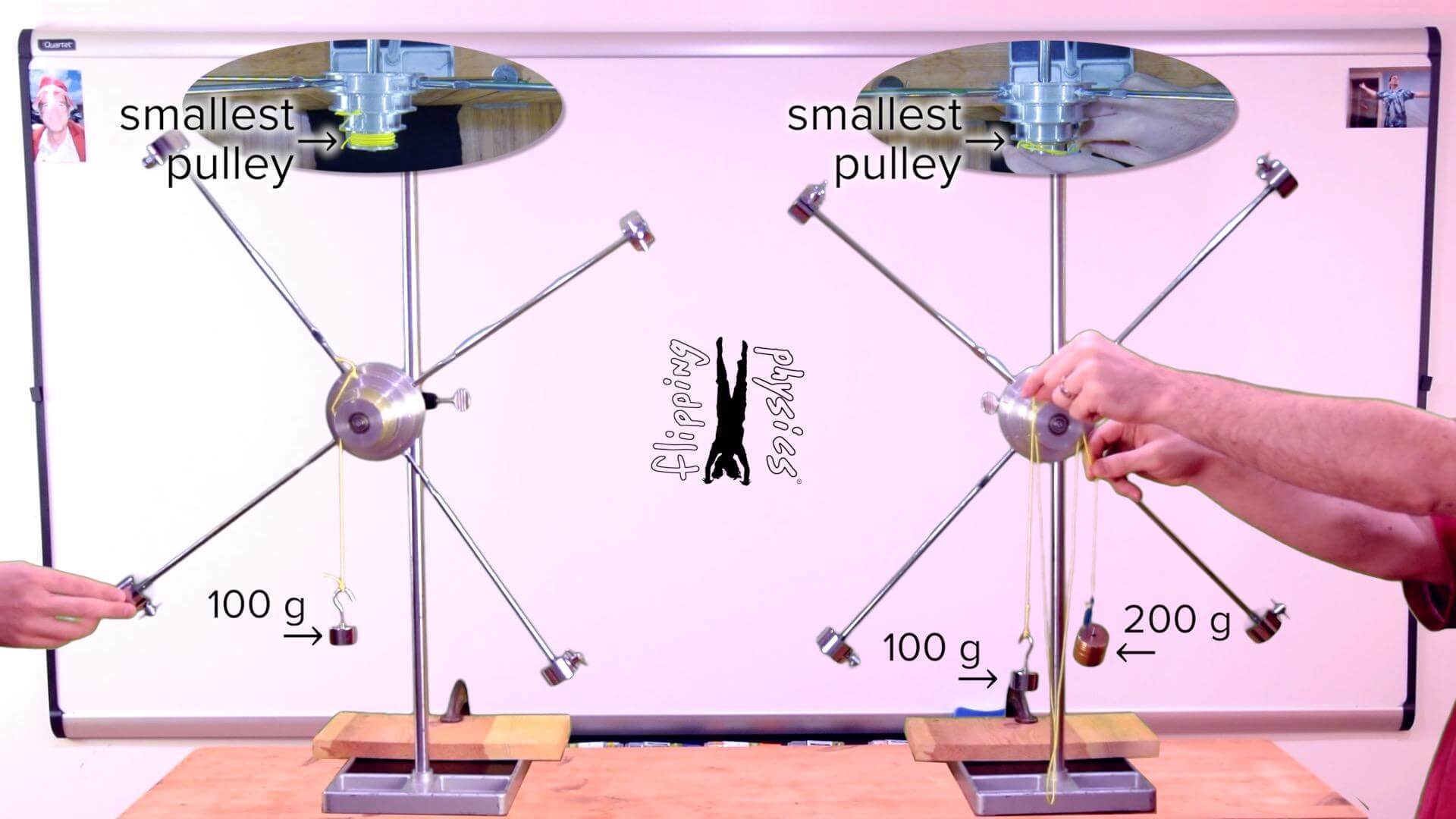 In order to determine what is going to happen, remember the Rotational Form of Newton’s Second Law of Motion includes net torque, not just torque.

Recall the rotational form of Newton's Second Law of Motion.

But why do the two demonstrators have “roughly” the same magnitude angular accelerations? Adding the 200 g mass to the demonstrator on the right increases the total mass of the system. Because inertial mass is resistance to acceleration, increasing the total mass of the system actually decreases the angular acceleration of the system a little bit, even though the net torque should be roughly the same. Proving this requires drawing free body diagrams, summing the torques on the wheel, and summing the forces on each mass hanging, so I am not going to walk all the way through that solution here.

The pulley sizes of the rotational inertia demonstrator are provided by Arbor Scientific. They are 20.22 mm for the small pulley, 28.65 mm for the medium pulley, and 38.52 mm for the large pulley. Given this information, we can even predict which way the rotational inertia demonstrator will rotate if we were to hang 100 g over one side of the large pulley and 200 g over the other side of the small pulley. Before releasing the demonstrator, the angular acceleration of the demonstrator is zero because it is at rest. Therefore the torque caused by the 100 g mass will be 0.3852 meters times 0.100 kilograms times 9.81 m/s2 times the sine of 90 degrees which equals roughly 0.38 N.

Torque calculated for a 100 g mass on the large pulley

Therefore, the net torque caused by both masses acting on the demonstrator before it starts to accelerate is the difference between these two torques because they act in opposite directions.

Net torque on the large pulley is equal to the difference between the torques since they act in opposite directions.

If you enjoyed watching this video by Jonothan Palmer, the creator of Flipping Physics, please let us know in the comment section below and check out his YouTube page for more videos like this one.