The electrical force is so pervasive that it is difficult to name many aspects of the physical world not affected by it. At the most fundamental level, the attractive electrical force between electrons and protons holds atoms together. On a bit larger scale, electrical interactions between atoms are responsible for the formation of molecules. On a much grander scale, a rapid discharge of atmospheric electricity manifests itself as a flash of lightning. All these phenomena are governed by the same basic principles.

Though every student has had direct experience with static charges (who hasn’t been zapped after walking across a carpet?), few understand the mechanisms underlying electrostatic phenomena. The collection of activities that follow are designed to spark interest in learning about electricity.

Rub an inflated balloon against a piece of fur, wool or cotton. Does the balloon become charged? To see, bring the balloon near some tiny bits of paper as a test. What happens as you approach the pieces of paper? 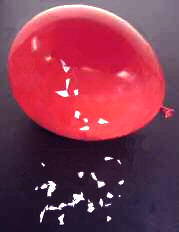 Try charging other materials by rubbing them together. The possibilities are limitless! As you test various pairs of materials, make a list of the pairs that seem to work best.

The charge on an object may also be determined by consulting the triboelectric series, a ranking of materials based on their tendency to give up electrons. 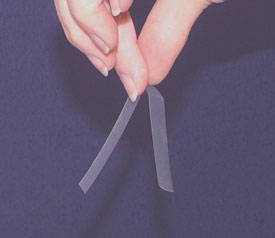 Now fold over a couple of centimeters of tape to form a tab at the end of each strip. This will provide a non-sticky finger hold. With the adhesive side down, attach one strip to a smooth table top. Make sure the tab protrudes over the edge of the table. Place the second strip of tape on top of the first, again with adhesive side down. Quickly remove the top strip of tape. Then remove the tape that is attached to the table. Bring the two pieces of tape close to one another with their sticky sides facing outward.

What do you observe? What does this tell you about the charges on the two strips of tape? Can you explain the how the strips may have become charged the way they did?

Key Concept: The electroscope is a device that can be used to detect the presence of an electric charge. An electroscope’s operation is based on the principle of like sign charge repulsion.

There are a number of simple electroscopes that you can build out of household materials. Instructions for making one type of electroscope are given below. Once you have constructed your electroscope, you may use the device to perform a number of electrostatic experiments. For example try the experiments Charging by Contact and Inductive Reasoning described below. 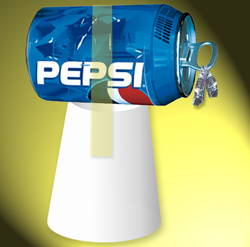 Key Concept: Neutral conductors can be charged by conduction if they come in contact with charged objects.

Key Concept: A charged object can induce charge separation in a neutral object.

Key Concept: An object may be given a residual charge by induction. An object charged by induction acquires a charge opposite in sign to that of the object inducing it.

"Board" with Electrostatics? Attracting an Uncharged Insulator

Key Concept: A charged object of either sign will attract an uncharged insulator.

Charge the balloon once again, but this time, bring the wool or cloth used for charging near the end of the board. What happens? What does this tell you about the condition of the wool or cloth?

Place an empty aluminum soda can on a table top. Bring a charged object, for example a balloon, near, but not touching the can. What happens? Explain why this is occurring. Once the can is rolling, how can you stop it with the charged object?

Will an object with a charge opposite that of the balloon or tube have the same effect on the can? To find out, you can experiment with the wool or cloth used in the charging process. 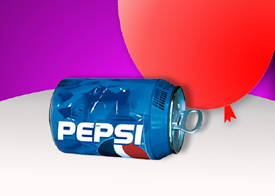 Key Concept: Excess charge on an isolated conductor is located entirely on the outer surface of the conductor. As a result, there are no electrical effects inside a conductor.

Turn on a small battery-powered radio and tune it to an AM station. Lower the radio into a coffee can or a cage fashioned from screen wire or aluminum foil. Can the sound still be heard when the radio is in the container? How can this effect be explained?

The metal surrounding the radio in this demonstration is often referred to as a Faraday cage. A Faraday cage is an enclosure of metal or metallic meshwork. If a region in space is completely surrounded by a Faraday cage, electromagnetic waves are effectively screened from the enclosed region. Likewise, electromagnetic effects produced inside the cage cannot permeate the enclosure. Named for physicist Michael Faraday, who built the first one in 1836, Faraday cages may be found in a variety of settings.

A common example of a Faraday Cage is a metal automobile body. Contrary to a common belief, you are safe in a car during an electrical storm not because of the rubber tires but because of the shielding effect of the metal that surrounds you. Bridges supported by metal girders may interfere with a car radio’s reception for the same reason. Faraday cages are often used to surround electronic components found in computing and communications devices. These cages serve two purposes: they keep unwanted ambient electromagnetic radiation out while at the same time containing component-produced radiation.

Unlimited Charging.....no, not on your credit card!

Key Concept: The electrophorus, an early charging device, is used for producing electrostatic charge by induction.

An electrophorus is an amazing device for it serves as a virtually inexhaustible source of electrical charge. Constructing an electrophorus is very simple. All you need is an aluminum pie pan, a Styrofoam plate and cup, some tape or hot glue. Simply attach the Styrofoam cup to the center of the pie pan using tape or hot glue and you’re in business (see figure)! Charging the pie pan is a three step process: 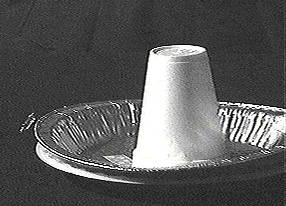 To convince yourself that the pie pan is charged, you can bring it in contact with the electroscope, hold it near a thin steam of water, or give a friend a mild shock.

You may also use the charge on the pie pan to briefly light a neon or fluorescent lamp. Touch one terminal of either lamp with a finger while touching the terminal with the charged pie pan. After the pie pan is discharged, it may be charged again as many times as you like. You don’t even have to rub the Styrofoam plate again before charging the pie pan. Why this is possible?

An electrophorus with substantially greater charge capacity may be constructed by replacing the pie tin and Styrofoam plate with a large pizza pan or cookie sheet and a sheet of blue polystyrene insulating material. This insulating material usually comes in large sheets from home supply stores. Any plastic handle may be attached to the larger pan with hot glue.

Key Concept: Some molecules are permanently electrically polarized. That is, one side of the molecule has a little more negative charge than the other. This polar water molecule has the shape reminiscent of a famous mouse. 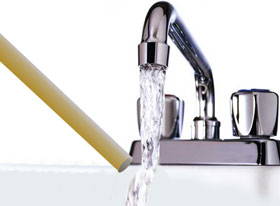 Getting a Charge out of Television?

Key Concept: The screen of an operating CRT-type television is charged. As with an electrophorus, an object brought close to the screen can be charged by induction. Note, this activity is only possible with a cathode-ray tube TV. Modern LCDs don't operate the same way.

A simple electrostatic motor may be constructed from two empty soda cans, a short length of thread, a plastic pen, two square feet of aluminum foil, and two connecting wires. After removing the tabs from the cans, tie the thread to one of them; discard the other tab. Tie the other end of the thread to the plastic pen. Use the cans, separated by about three inches, as supports for the pencil. Tape the bare end of one wire to the can on the left. Connect the other end of the wire to ground (e.g. a water faucet). Use the second wire to connect the can on the right to the aluminum foil.

After turning on your television set, press the aluminum foil onto the screen. Electrostatic attraction will keep the foil in place after removing your hand. The tab should begin swinging back and forth between cans. 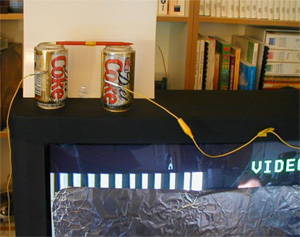 Key Concept: A Van de Graaff electrostatic generator is a device that transfers charge to an insulated metal sphere by means of a moving belt. Objects that touch the sphere acquire charge of the same sign as the charge on the sphere.

Benjamin Franklin was one of the most extraordinary human beings the world has ever known. Most agree that he was a genius for he was adept at writing, diplomacy, business, music, humor, leadership and, last but certainly not least, science.

When one thinks of Benjamin Franklin the first thing that usually comes to mind is an image of his death-defying attempt to demonstrate the electrical nature of lightning. Consistent with this mental picture of America’s first scientist, Franklin did indeed fly a kite up into a thundercloud and drew sparks from a key tied to the bottom of a wet string. He was fortunate to escape electrocution throughout his experimentation with lightning for it is reported that during one experiment he received such a severe electrical shock that his body went into seizures.

In addition to confirming that lightning was an electrical phenomenon, Franklin managed to sort out many of the mysteries of static electricity that had puzzled people for ages. After observing that a glass rod becomes charged when it is rubbed with a piece of cloth, he postulated that an equal amount of charge of the opposite kind collected on the cloth. This led to what is now known as the conservation of charge. Franklin also invented the lightning rod and coined many of the electrical terms we use today, such as conductor, condenser, positive and negative charge, electric shock and electrician.