You might assume that most of your students are capable of lighting a light bulb given a battery, a bulb, and a single strand of wire. In actuality, when faced with this challenge, some students may succeed at the task immediately while others may never be able to make the bulb light without assistance. According to a study done by Harvard Astronomy professor Phillip Sadler, only half of the students taking part in the survey could make a light bulb light up when given a bulb, battery and a piece of wire. What can pre-college teachers do to improve this statistic?

Research tells us that students learn best when they are allowed to ask questions of nature through exploration and experimentation. With that in mind, this edition of CoolStuff offers several activities that invite students to ask questions and find answers regarding electrical phenomena.

Key Concept:The electromotive force (emf) is not a force, but the potential difference, or voltage that can be used to supply energy to an electrical circuit. Sources of emf include batteries, electrical generators, and solar cells. Strictly speaking, the emf is defined as the potential difference measured across the terminals of a source when no current is passing through the source.

Place a wire just above and parallel to the needle in a compass. Observe what happens when a closed circuit is formed by connecting the two ends of the wire to opposite ends of a battery. What do you observe? Now reverse the polarity of the battery by reversing the direction of the battery in the circuit. What happens to the compass needle now? How can you explain your observations? 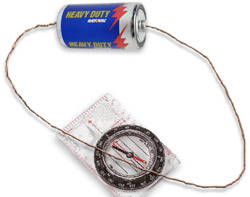 A number of activities in this edition of CoolStuff require the use of a galvanometer. If you do not have a commercial galvanometer, you may make one by wrapping thin copper wire tightly around a compass.

Key Concept: The electromotive force (emf) is not a force, but the potential difference, or voltage that can be used to supply energy to an electrical circuit. Sources of emf include batteries, electrical generators, and solar cells. Strictly speaking, the emf is defined as the potential difference measured across the terminals of a source when no current is passing through the source.

There are numerous electrical cells that can be made from materials found around the house. The simplest perhaps is the "eleven-cent cell." It may be constructed by placing a piece of paper toweling that has been soaked in salt solution or vinegar between a dime and a penny. When the leads of galvanometer are attached to the coins, the meter will register a small voltage. When a number of these cells are connected in series, that is, end to end with dimes touching pennies, a larger voltage may be obtained. 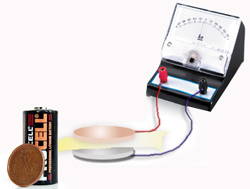 To the surprise of many, a lemon and a couple of metallic electrodes are all you need to produce a little “juice.” Any two types of metal may be used as electrodes. In fact, you can use a dime and a penny again. To produce a bit more voltage (~ 0.9 v) try using a galvanized nail and a penny.

Unfortunately, a cell using these metals does not produce enough voltage to light a mini bulb, but don’t despair. By connecting three or four of these lemon cells in series, you should be able to light up a light emitting diode (LED) or even power a liquid crystal clock. If you find that your galvanized nail/penny lemon cell is not capable of lighting an LED, you may want to try samples of copper and zinc from the science storeroom. 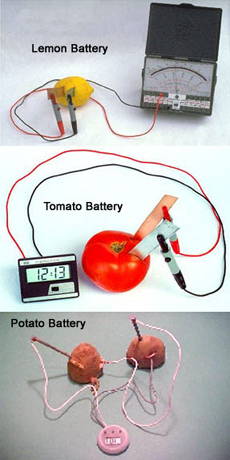 The hand battery takes advantage of the naturally-occurring electrolytes found on the skin to produce a potential difference. When one hand is placed on a copper plate and the other hand on an aluminum plate, a current is produced through a galvanometer connected to the plates. Sweaty hands will increase the meter reading as will pressing down harder on the plates, thus increasing the area of contact between skin and metal.

If a closed loop is formed by joining the ends of two wires made of dissimilar metals and the two junctions of the metals are at different temperatures, an electromotive force, or voltage, will be produced that is proportional to the temperature difference between the junctions. 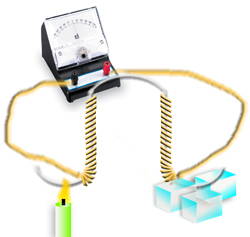 Today thermoelectric generators rely on semiconductors rather than junctions consisting of dissimilar metals. Some of the current applications of these solid state devices are quite intriguing. In Northern Sweden, stove top generators are used to produce sufficient electrical power to operate small appliances. A particularly ingenious use of thermoelectricity has been developed by the watchmaker Seiko. They have managed to eliminate the need for a watch battery by tapping into body heat.

Key Concept: An electric motor may also function as an electric generator. A galvanometer consists of a magnet surrounded by a coil of wire, the essential components in both electric motors and generators.

Use two lengths of wire to connect two galvanometers. Shake one of the galvanometers while watching the needle of the other meter. What do you observe? Now shake the other galvanometer. Is it possible to say which galvanometer is agent and which is victim? 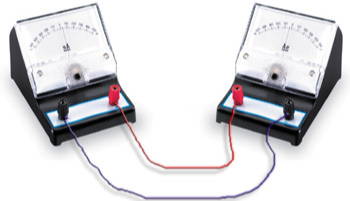 The motor/generator effect may be dramatically illustrated with two Genecon generators. After connecting the two generator’s leads together, turn the crank of one of the Genecons and observe the crank of the other. The first Genecon functions as a generator while other unit acts as a motor. Now reverse the roles of the two Genecons.

Key Concept: The human body is a conductor of electricity.

Although the resistance of dry skin is very high (~ 500,000 Ω), a tiny, yet detectable current (about a millionth of an amp) will flow through the body with the application of only a few volts. The Energy Ball is a device capable of detecting such a current.

Place two fingers on the two metallic contacts on an Energy Ball. Notice that the ball flashes and a tone is produced. This indicates that a current is flowing through your fingers and a portion of your hand. If either finger is removed, the circuit will be broken and the Energy Ball will cease to function. 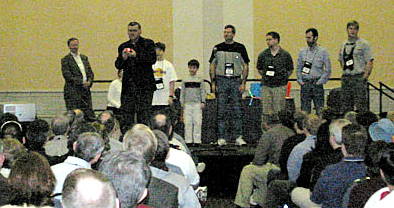 The Energy Ball may be used to demonstrate what is known as series circuit. While holding hands with a friend, touch one contact on the Energy Ball with a finger. When your friend’s finger touches the other contact, the device will become activated. If the circuit is broken, for example if you let go of your friend’s hand, the Ball will stop functioning. Try forming a series circuit consisting of more people. See if there is a limit to the number of people you can include in your circuit.

Key Concept: Light emitting diodes in the Visual Electricity Demonstrator are used to represent electrons, their motion and the flow of electrons through a circuit.

Turn on the Visual Electricity Demonstrator. (VED) You should see stationary red LED’s. These lights are meant to represent electrons. With no source of emf connected to the device, there is no current, yet there are still charges present, here represented by stationary LEDs. Now form a circuit containing the VED, a 1.5 volt battery, and connecting wires. Describe the LEDs now. What happens when you reverse the polarity of the battery? What does this tell you about the direction of charge flow?

Connect the leads of a Genecon generator to the VED. Observe the LEDs as you slowly turn the generator’s crank. What happens as you turn the crank more quickly? (Caution: To avoid damage to the VED, only turn crank at a moderate rate.) Now reverse the direction of rotation and observe the motion of the LEDs. What does this indicate about the direction of motion of the electrons in the circuit?

You can produce an alternating current (AC) by repeatedly changing the direction of rotation of the Genecon’s crank. Notice that the red LEDs move in one direction, then the other, but make no permanent headway. If a light bulb is included in the circuit, it will light up, albeit with a flicker, even though the electrons are not moving around the circuit. Hence, energy is still being delivered to the bulb even though the charges are just moving back and forth.

An electric current may be thought of as the movement of electrical charges through a conductor, such as a wire. Electric charges, such as electrons, are not produced by a battery: they are already present in conductors.

When a source of potential difference, say a battery, is connected to a wire, electrons start to move. However, due to resistance in the wire, electrons do not travel unimpeded. Instead, they constantly suffer collisions that result in a start-stop type of motion. This motion is described by a quantity known as the drift velocity. A typical drift velocity may be of the order of a tenth of a centimeter per second.

If the electrons move so slowly, why does a light seem to go on as soon as we flip a switch? To understand this phenomenon, the distinction must be made between the motion of the electrons and speed with which the electromagnetic disturbance travels along a wire.

When a circuit is closed, a disturbance propagates down the wire at nearly the speed of light. This disturbance results from one electron pushing on the next. Just as with water in a hose, the water from the spigot does not travel the length of the hose in an instant, but the pressure exerted by water at the spigot does.

Metallic as well as nonmetallic conductors offer resistance to charge flow. In metals, this resistance is caused by impurities and imperfections in the metal as well as thermal vibrations of metal ions. Electrical resistance gives rise to heat as is evident by glowing toaster wires and electric range elements. In such household applications, resistance is a good thing. However, in most instances, the transformation of electrical energy into heat is something to be minimized, or in a perfect world, eliminated altogether.

It came as a real shock to Kamerlingh Onnes, a Dutch physicist, that some materials lose all electrical resistance when cooled below a certain temperature. In 1911, he found that once a current is established in a super-cooled ring of mercury, it will continue undiminished without any applied voltage. Superconductors, as he called them, are finding applications in medicine, transportation, and computing.