The Fun Fly Stick is a toy that appears to magically "levitate" and repel objects after the teacher presses the button on the handle. What makes the Fun Fly Stick operate is a scientific principle of static electricity that Robert Van de Graaff utilized some 75 years ago. What Van de Graaff originally developed, was a device which produced very high voltages that were needed to accelerate particles to energies high enough to create new elements. This was also valuable in finding widespread uses in medicine and high-energy physics research. His Van de Graaff Generator consisted of a hollow aluminum sphere seated on top of an insulated column that contained a latex belt moving at high speeds. The latex belt would draw negative charge (electrons) from the felt roller in the base of the device and deposit those electrons ultimately on the outside of the aluminum sphere where the sphere would become negatively-charged.

The Fun Fly Stick has a design which parallels a "mini Van de Graaff Generator" and works in a similar way. When the teacher pushes the button on the handle of the battery-powered wand, a static charge is formed which builds on the wand. When one of the included five Mylar™ (thin plasticized aluminum foil) shapes are in contact with the wand, the Mylar becomes "Charged by Contact" or "Conduction", resulting in the same charge as the wand.Since like charges repel, the Mylar shapes will immediately expand to their pre-set shape and can be levitated and moved about the room simply by bringing the charged Fun Fly Stick in close proximity to the Mylar shape.

Interestingly enough, websites and science companies promoting this product claim that you can… "Press the button on the Fun Fly Stick for a few seconds to generate a negative static charge. Drop the tinsel shape onto the stick to quickly transfer the negative charge to the tinsel." Unfortunately, these claims are scientifically unfounded and after some simple testing by your students, you will find the charge on the Fun Fly Stick to be positive!

Some Fun Experiments and Demonstrations…

1. Find the charge on your Fun Fly Stick!

Using a pith ball, a student can determine the charge on the Fun Fly Stick. Charge a neutral pith ball by rubbing a balloon/plastic tube with rabbit/cat fur. Touch the pith ball with the balloon/plastic tube (Charging by Conduction) and the pith ball will become negative. Charge the Fun Fly Stick by pressing the button and bring it close to the negatively charged pith ball. The wand will attract the pith ball.Ask your students if this is absolute proof that the Fun Fly Stick is positive. Most will say that the experiment does prove that, in fact, the wand is positive. However, attraction does not prove nor determine the charge on an object because even a neutral wand would attract a negative pith ball.

Have the students now rub a glass rod with Saran Wrap™ (plastic wrap) and touch a neutral pith ball. You have charged the glass rod positively according to the Triboelectric Series and charged the pith ball positive as well. Now bring the charged wand near the positively-charged pith ball and… repulsion! Repulsion always proves the charge on an object. Now you can be certain that the wand is positive. 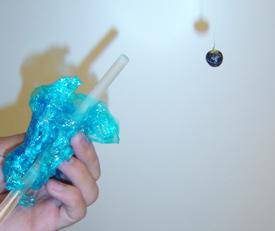 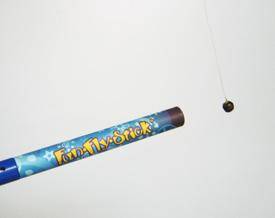 2. Use your Fun Fly Stick to apply "invisible glue" to paper!

Place a plain piece of paper against your blackboard, and it falls immediately. Hold the paper against the blackboard and rub the Fun Fly Stick on the paper and it will "stick" to the board. Ask students why the paper is held in place by rubbing the wand over the paper. The positively-charged paper attracts electrons in the neutral board to the surface and maintains the attraction (unlike charges attract) until the paper loses its charge to the air (depending on humidity levels). 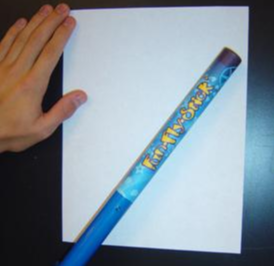 Apply an invisible layer of glue to a piece of paper.

3. Use your Fun Fly Stick to attract a water stream!

Hold the charged wand near a thin stream of water and the water stream will bend toward the Fun Fly Stick. The positively charge wand polarizes the water molecules causing the negative side of the hydrogen-oxygen dipole to rotate and attract to the stick, bending the water toward the wand.NOTE: When attempting this demo use a plastic bag over the wand to protect it from getting wet. If the wand does get wet in the process it will need to be thoroughly dry before it will work again. 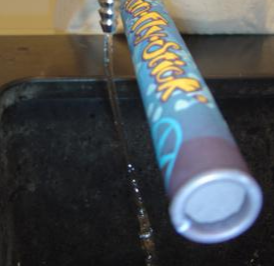 4. Use your Fun Fly Stick to make the Mylar shapes come alive!

Charge the wand and allow a Mylar shape (preferably an elongated shape… it works better!) to be charged by touching the wand. The Mylar shape will immediately repel from the stick due to the repulsion of like charges. If your hand is held near the wand, the Mylar will be attracted to your hand because you are neutral. Once the Mylar touches your hand, the Mylar will instantly become grounded (The Mylar is a conductor), losing its positive charge and become neutral. With the positively charged wand held in close proximity, the Mylar will again be attracted to the wand, touch the wand and be repelled from the wand. This process repeats causing the shapes to jump back and forth from your hand to the wand. Cool stuff!

Charge the wand and bring it toward some Rice Krispies™ (or puffed rice) on a lab table. The Rice Krispies will be attracted to the wand and then be repelled as soon as they gain a positive charge. Once grounded, they will instantly be attracted to the Fun Fly Stick again, creating dancing cereal! This is the poor man's version of a more expensive electrostatic demonstration called Volta's Hailstorm, which is sold by various science companies. Students could watch this demonstration all day!

Charge the Fun Fly Stick and bring it near an 8-foot piece of lumber (a 2 X 4 board works well) that is balanced in the center by an upside-down watch glass or some other friction-free pivot point. The wood has to pivot freely for the experiment to work. Hold the wand near the end of the wood board and the charged wand will attract the board. A similar electrostatic concept occurs as did in the can. The electrons in the wood nearest the charged wand migrate to that side of the wood, causing attraction. Students are impressed by the strength of the electrostatic force that causes the wood to rotate. 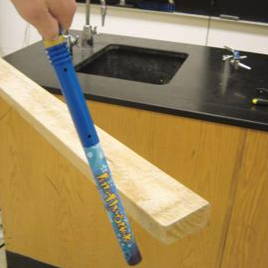 How strong is electrostatic force?

Stack pie tins (small tins that are used to make tarts) and use your charged wand to transfer a charge to the stack of tins. One-by-one, the tins will fly off the stack due to the electrostatic forces of repulsion between the pie tins. Due to the tins' individual weight, they will repel one after the other from the stack. This is a demo that previously could only be done with a full-size Van de Graaff generator!

Watch the tins fly away!

Everyone has heard the legend of Ben Franklin's famous kite experiment; even tested on the TV show "Myth Busters". While the actual flying of the kite in a thunderstorm by Franklin may still be up for debate, Franklin did experiment with electricity in many other ways. Using your Fun Fly Stick, you can create your own "Franklin's Bells", a device which Franklin did invent to detect nearby charge.You can recreate Ben Franklin's device by placing two soda cans on an insulated surface such as Styrofoam with one of the soda tabs hanging between the cans from an insulated support (wood stick). When touching one of the cans with your charged wand and touching the other with your finger, the soda tab will bounce back and forth at a very high speed, creating a bell-like sound.

Is this how Ben woke himself up?

The wand causes one can to be positively-charged; the other can is grounded by your finger and will be neutral. The soda tab is attracted to the positive can, gains a positive charge, and then is repelled to the opposite can. Touching the opposite can, the soda tab is grounded immediately and becomes neutral. Once neutral, the process repeats at a very fast rate and creates the ringing bell sound. This is a demonstration that your students won't forget!

Special Thanks to Our Contributors: