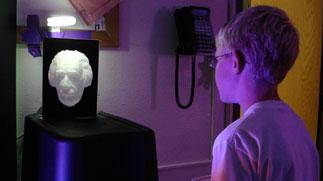 This edition of CoolStuff features some new exhibits designed to put a spooky spin on science. The displays, selected with ease of construction in mind, use materials, and apparatus found in most science storerooms. Specialty items, such as a green laser pointer, may be readily obtained from Arbor Scientific. To make the most of your Haunted Laboratory experience, we're offering the following suggestions from physicist and Haunted Laboratory pioneer Thomas Zepf.

(Note: To read Professor Zepf's account of his experiences with haunted laboratories, see the October 2004 edition of The Physics Teacher magazine.)

We have all seen a reflection of ourselves in a kitchen or bedroom window at night. Because we are in a room that is well illuminated and the outside is dark, light reflected by the window predominates over the light coming through the window from outdoors. We think of the glass as an ordinary mirror, often forgetting that the people on the outside can see us very clearly. This is essentially the "one-way mirror" effect used in situations where an observer wishes to remain hidden. In police stations and department stores, partially silvered panes of glass behave as mirrors to those on one side. To those in a dark room on the other side, the glass functions as a window.

This device demonstrates that a transparent material may be an effective reflector as well as transmitter of light. It also illustrates that the object and the image produced by a plane mirror are equidistant from the mirror's surface. These two phenomena make the morphing of two faces possible by simply adjusting the intensity of the light falling on two individuals sitting on opposite sides of the glass. The results of this simple exercise can be very freaky, to say the least! Things can become even spookier if one of the participants wears a Halloween mask. 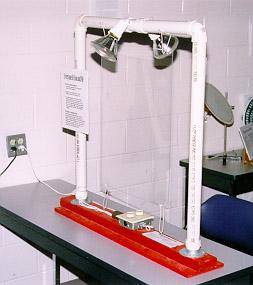 The apparatus consists of a sheet of Plexiglas and two floodlights controlled by dimmer switches. Users sit on opposite sides of the Plexiglas and adjust each light's intensity until the image of one person's face merges with the image of their partner's face. It should be noted that only one participant at a time is able to observe the effect.

The photos above represent two possible setups: a more polished version of the device (Top image) and a very simple setup (Bottom image). In the simpler device, the glass from an old ripple tank serves as the reflecting surface. Two dimmers (Variacs also work well) are used to control the brightness of two standard light bulbs or two flood lamps. An eerie effect may be achieved by using different colored bulbs (e.g. orange and blue) in each of the sockets.
Instructions:

Monsters of the Deep in a Drop of Pond Water

A drop of pond water at the end of a syringe or eyedropper can be treated as a small spherical lens. The light beam that falls on the drop refracts as it passes through the water-air interfaces at both sides of the droplet. The shadows of the small creatures contained in the suspended drop of pond water are magnified up to 1000 times by the liquid lens.

This activity was inspired by an article in The Physics Teacher magazine by Gorazd Planinsic.

Watch the laser light on the screen. You should see the magnified shadow images of microscopic organisms floating and moving within the projected light. Small single-cell animals like paramecium appear as dark spots surrounded with interference fringe contours. Larger animals such as mosquito larvae, Cyclops, or water fleas appear like real monsters on the screen.

The top image shows the setup for the Monsters of the Deep using a ring stand to hold and adjust the drip rate of the eyedropper. The bottom image shows the darkroom results of the various creatures we found in our "Swamp Water". 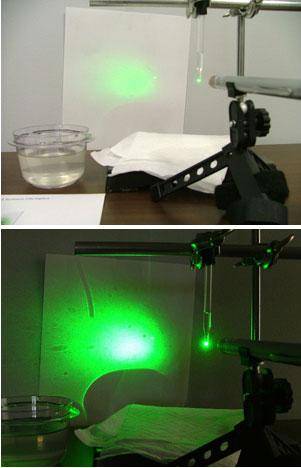 The one-way mirror (see "Freaky Faces") has long been used in the performing arts, magic acts, and amusement parks. It was exploited for theatrical purposes in the mid-nineteenth century when J.H. Pepper produced what appeared to be a hovering apparition on a London stage. By angling a large glass plate between the stage and the audience, Pepper produced an image of an actor who seemed to hover over the stage (see figure below). To create the illusion, a well-illuminated actor was located in front of and below the stage, out of the audience's view. A light source of variable intensity was employed to make "Pepper's Ghost" come and go at will. A darkened theater insured that unwanted reflections would not reveal the presence of the glass. Similar techniques are currently used in amusement parks and museums to startle and amaze unsuspecting visitors. 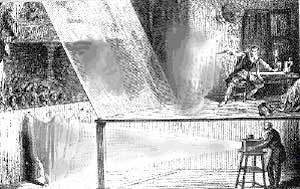 You can create a simple version of the Pepper's Ghost illusion with a sheet of glass or Plexiglas, a candle, a drinking glass and a cardboard box. First, remove the flaps from the mouth of the box. Spray the inside of the box with black paint or line it with black construction paper. Place the sheet of glass or plastic over the mouth of the box. Ideally, the sheet of Plexiglas should be the same size as the opening; however, this is not necessary. Place the box on its side with the mouth of the box facing you. Fill the glass with water and place it inside the box. Now cover the opening with the Plexiglas sheet. You may wish to tape it in position. Finally, place a lighted candle in front of the box so that the candle is in front of the drinking glass and both objects are equidistant from the Plexiglas. Now turn off the room lights. When you light the candle, the flame will appear to be burning in the water! The photos below are physicist Dave Wall's Pepper's Ghost device.

A setup resembling the original Pepper's Ghost apparatus may be constructed from a large sheet of glass or Plexiglas, a light source, and a person in costume or a scary mannequin. The reflecting sheet should be slightly taller than the observer. A smaller sheet may be used by raising it with supports.

Key Concept:
This exhibit consists of a reverse mask. That is a mask that is intentionally set up to be viewed from the wrong side. The display demonstrates that our eye-brain system is conditioned to interpret all faces as convex even when they are not.

Teacher Instructions:
The centerpiece of this display is a white translucent mask. In the photo, a mask of Einstein is shown (see below for details), but any inexpensive mask will work. Simply place a standard light bulb behind the reverse mask, stand approximately 10 feet away and view the mask with one eye closed. Presto! The concave face will appear convex! Once the illusion is established, open both eyes. If you are like most people, you will still see a convex face. Now move from side to side. The face will follow you wherever you go!

When we look at a reverse mask, our eye-brain system perceives a normal face for two reasons: shadowing and expectation. We are accustomed to seeing subtle shadowing when human faces are illuminated from above. These shadows tell us that the face is in relief. Similar shadowing is produced when light passes through the translucent mask. Perhaps an even more important factor in establishing a sense of convexity is expectation. Since we virtually never encounter a concave face, our previous knowledge tends to override reality. That is, we tend to see what we believe rather than believe what we see.

As we move past the mask, we see more of one side of the mask than the other. Based on experience, we interpret this change in perspective as being caused by the rotation of the face rather than a change in viewing angle. 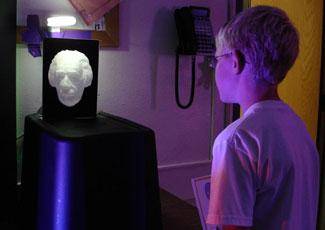 If we get too close to the mask, we receive visual information that destroys the illusion of convexity. For example, reflections from the plastic surface often reveal the true curvature of the mask.

Student Instructions:
Stand a few feet away from the mask. With one eye closed, look at the mask. Does the mask appear concave or convex? Now open both eyes. Does the mask continue to look convex? Finally, with both eyes open, move from side to side. Can you escape the gaze of the mask?

Using a little Tide or Cheer and a black light, you can make messages and scary images appear seemingly out of nowhere. Many liquid detergents contain optically active fluorescent dyes called chromophores. These dyes serve as whitening agents that are intended to make yellowed clothing look white and brighter. When illuminated with ultraviolet light, these liquids fluoresce, giving off a cool blue light. By mixing roughly equal parts of detergent and water, you can produce a "paint" that is invisible in white light but fluoresces dramatically under black (ultraviolet) light. You may write a message or draw with your finger tip or a brush on a tabletop, wall, or sheet of paper. Once it has dried, your painting will be virtually invisible in normal light but readily visible in ultraviolet light. 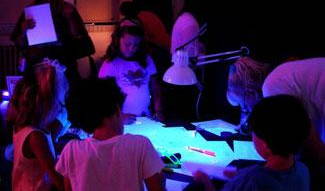 This exhibit illustrates an effect often called the "Waterfall" or "motion aftereffect" illusion. If you stare at a waterfall, cells in the eye that sense downward motion becomes fatigued. If you shift your eyes to the side of the waterfall, the nearby rocks appear to float upwards because the cells that sense upward motion are not tired and send a stronger signal to your brain. This causes your brain to conclude that the rocks are moving upwards. The same effect can be observed if you stare at a road while in a moving car and then divert your gaze to a stationary object.

To duplicate this effect, print out the dotted disk and attach it to a slow-moving turntable. An old record player set at 33 1/3 works well. You can get your skin to seem to ooze by following these steps: Stare at the center of the spinning disk for 30 seconds.

After 30 seconds of staring, look at the palm of your hand, face or arm.

Does your flesh seem to be oozing? Does it appear to turn in the same direction as the disk or in the opposite direction?

Try looking at objects in the room after staring at the disk for 30 seconds.

If you don't have a turntable, mount the disk on a piece of circular cardboard. Then attach the center of the disk to a pencil's eraser with a thumbtack. Spinning the disk at a fairly constant rate by hand is guaranteed to get your skin crawling!