Most teachers burn magnesium to show that it burns brightly and quickly creating magnesium oxide and a bright white light. Some people know that magnesium can replace zinc in the lemon battery to give a higher voltage. But what most people do not show is that it also the magnesium fire also produces ultraviolet light. 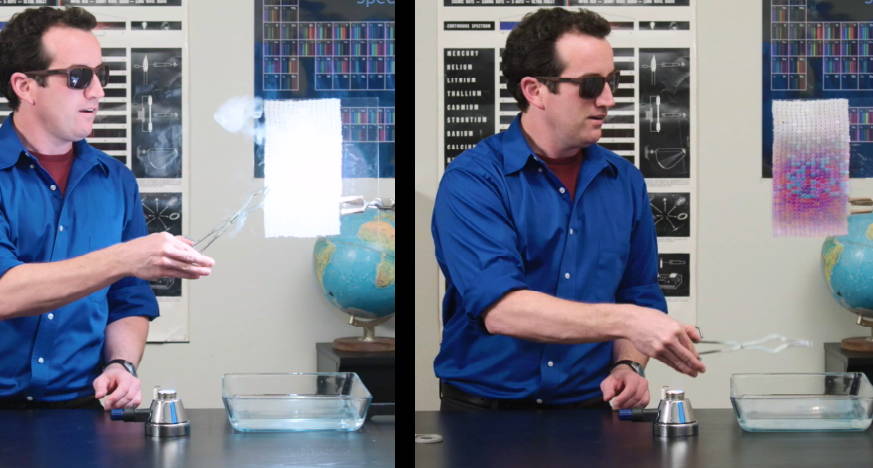 Gluing an array of uv beads to a plastic sheet can prove that white hot magnesium is actually giving off a lot of ultraviolet light…It is best that you wear sunglasses when you perform this demo!

Magnesium is not as bright or as hot as the sun, but when you are indoors, your pupils are much more dilated. This provides for an opportunity for damage to your eye if you look directly at the fire. Hence, I recommend sunglasses.

A related demo can be done with a lightbulb viewed through a diffraction grating. When slowly turned on with a dimmer swtich, we can see the reds and yellows show up first; only when becoming very hot do we see the deepest blues. Note that you have to view the final spectrum to understand the true color the camera picks up. 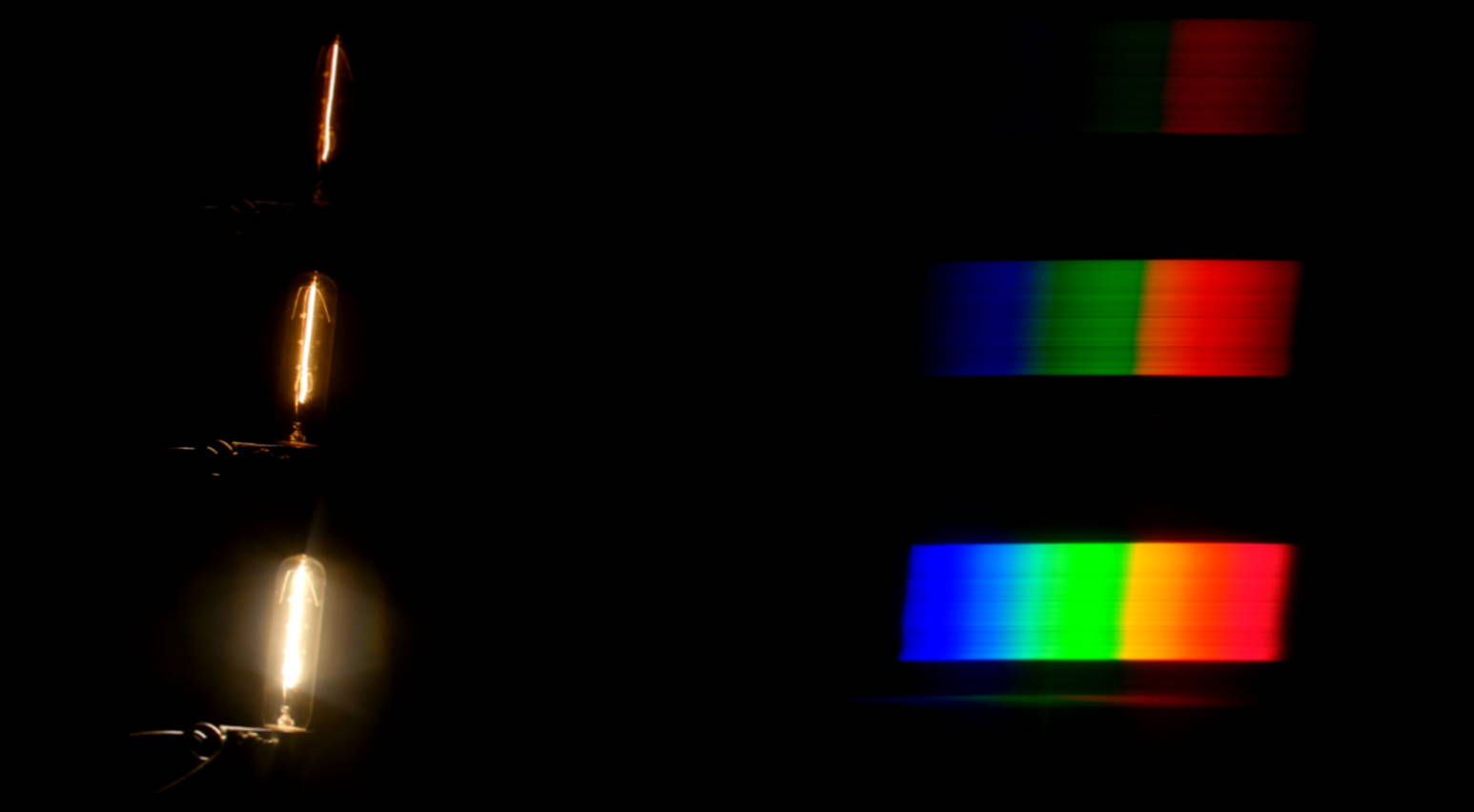 The light mill radiometer is a small heat engine. This one statement clarifies the physics of this ubiquitous device. What is not as clear is why the black side is usually receding under the influence of visible light.

Black heats up faster than white. This causes a slightly higher pressure on that side which pushes it backward as the air molecules are pushed away from it. There are some finer details such as how the air flows over the vanes, but this explanation is satisfactory for introductory physics.

The black will absorb radiation of all wavelengths, not just visible. When hot water is poured on the radiometer, it causes the glass to heat up and glow – in the infrared. This invisible light from the inside of the glass warms the dark side more causing the same effect.

Glass is opaque to long-wave infrared light and so to witness this differential heating effect with a thermographic camera one will have to break open the radiometer. 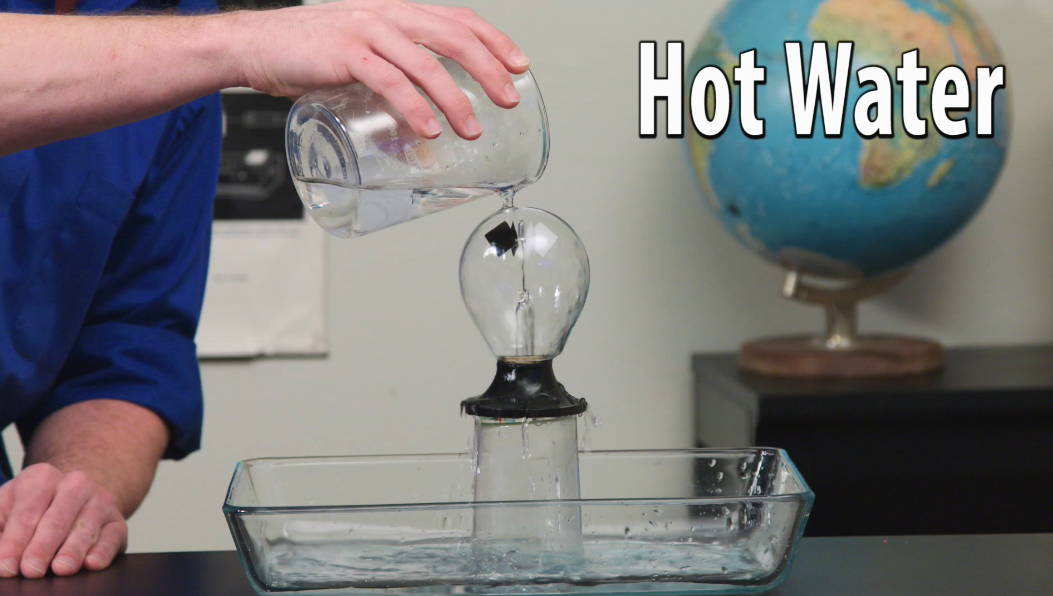 The surprise happens when a hot radiometer is cooled with cold water. The vanes spin backward with the white receding. We hypothesize that the white side must now – for some reason – be warmer than the black. We conclude that not only does black heat up more quickly, but it also cools down more quickly. This is a often cited concept, but rarely demonstrated. A black object both heats up faster and cools down faster than a white object. Now you have proof.

What is the cause of the twinkling star? Astronomers talk about nights of “good seeing” on which there is better clarity in the sky. These atmospheric conditions usually involve less haze, less dust, no moon, and low wind. The wind can be a big help. Atmospheric turbulence, especially in the high atmosphere, can mean twinkling for stars.

In outer space and on the moon, the stars do not twinkle. They shine steady, much like the planets do for us earthbound people. Although, planets will twinkle too, when low enough in the atmosphere (for example I have seen a setting Venus twinkling) or on nights of bad seeing.

Recreate the twinkling effect of stars by using an overhead projector shot through a ripple tank of water. Project a constellation and cause some ripples. This will cause the familiar twinkling effect. This happens as the water bends and shapes the starlight much the way a lens bends light. The lens effect comes from the bendy surface of the water. 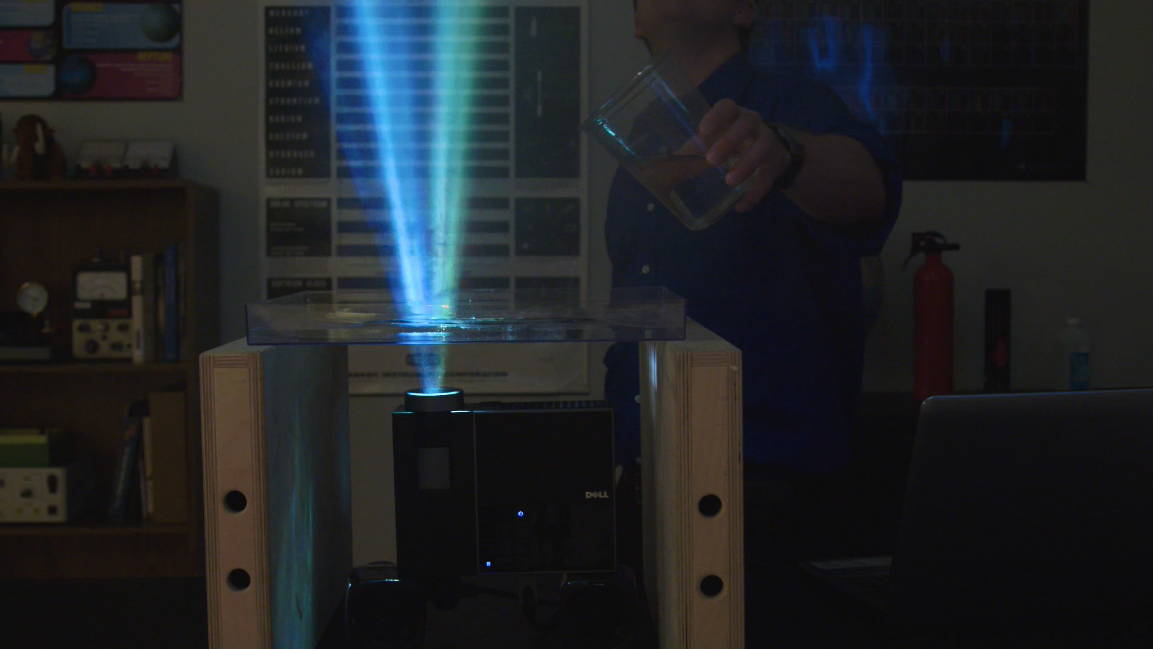 Experiment with different height arrangements between the ripple tank and the projector to find what works best for your stars.

4 - Wavelength of Light in Water

Normally, we can measure the wavelength of light with a ruler and a diffraction grating. Try with lasers of different colors. For example, the green laser should have a wavelength of 535nm, which it does in air. Red will be larger, and blue will be smaller.

Putting the diffraction grating in the water helps to show that the wavelength has changed. But underwater the wavelength turns out to be much closer to 400nm. That’s a decrease of 25%, and more importantly, is consistent with the theory.

The first formula might have n=1 for air and n=1.33 for water, where n is the index of refraction. The speed of light is c, and v is the wave velocity in any medium. Use the third formula to determine the wavelength. Here, X is the first laser dot (order) distance from the center dot after passing through the grating, d is the side of the grating’s spacing, and L is how far the grating is from where the laser dots are landing. When light enters water, the speed and wavelength change. But not the frequency.

Note: The above diffraction formula is an approximation. Better data can result from using other versions of the formula like Snell's Law which utilize angle measurements rather than distance.

Iron, nickel, and cobalt are the most familiar magnets. The magnetism grows through the formation of microscopic crystals called domains. These crystals grown in the direction of the magnetic field in quick little clicks.

You can hear the magnetism taking shape by placing the nickel in a coil and connecting to speakers. A crackling will be heard as the nickel is crystalized into a magnet.

The clicking comes from Faraday’s Law. Rapid changes in magnetic fields generate voltages in coils. This voltage is being converted into sound, which is what speakers do. 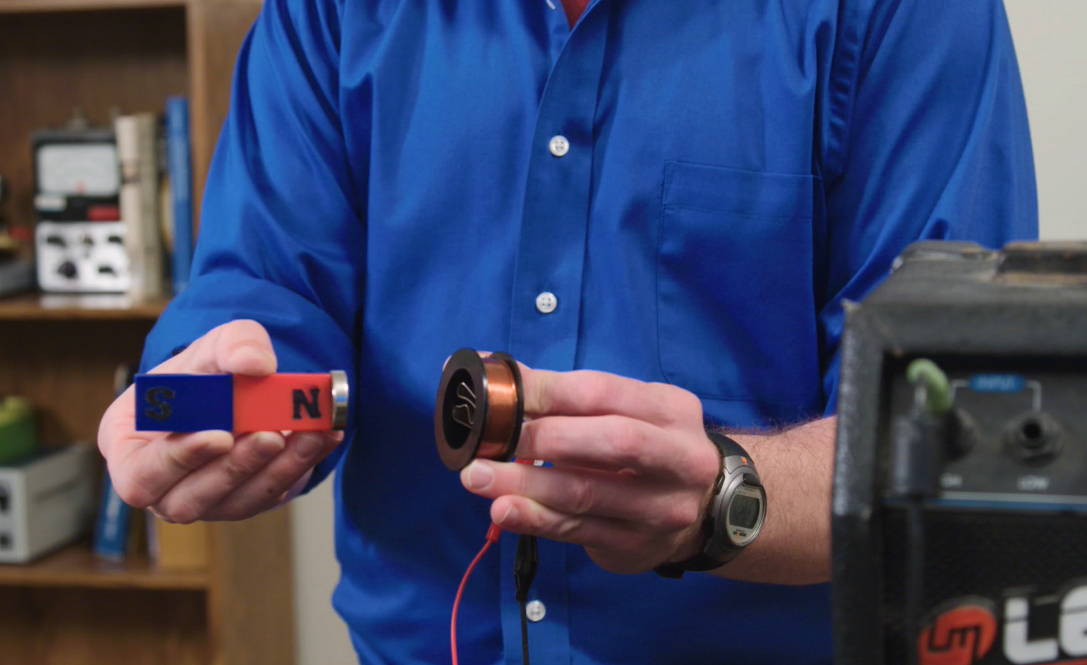 There are some problems with the domains model. The first is that people often show complete magnetization as if every domain is in the direction of the magnetic field. This is an exaggeration, as magnetized objects only require a slight percentage of their domains aligned and the misaligned ones generally never disappear. The second is that the domains change shape when they flip. For example, one of the aligned domains will grow to fill the space of one of the misaligned domains. That is still a jolting process and so as a result we can get rapid changes in magnetic fields, which is what causes the Barkhausen Effect sound.

Get yourself a Super Fog Machine and an Airzooka. Now you can make the invisible vortex rings visible. Having the smoke in place will improve your aim, you will actually be able to see the vortex ring.

The way a vortex works is that the air in the middle is moving forward and the air on the outside is moving backward. This rolling smoke shape closes in on itself and makes a loop. In the case of a smoke ring there is a circular collection of these loops. Notice that a vortex is not a wave because it carries the matter with it. Waves are energy disturbances that pass through matter. 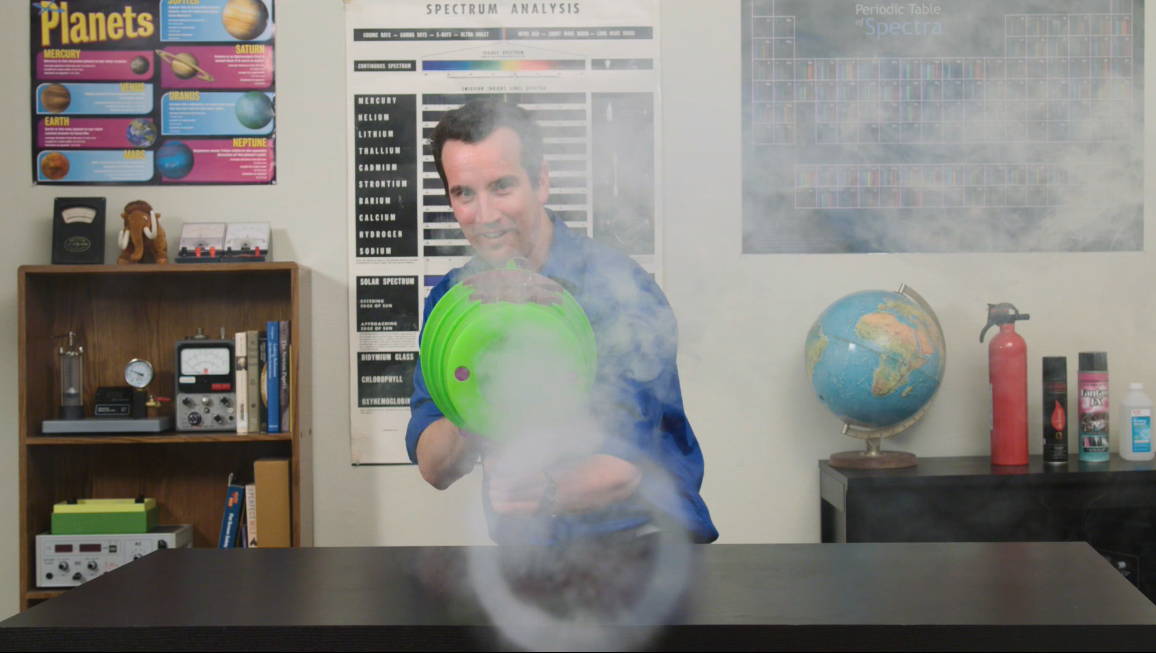 Use this vortex to knock over cups, blow out birthday candles, and wake up sleepy students. One of the most interesting vortexes is the mushroom cloud from atomic bombs.

You may already be doing the demonstration where you pull a rubber band across a cardboard box to hear the vibration and the tension effects. But there is a better way to do this demonstration.

In the video, I used a bass guitar (with reverb) to help you hear what I am hearing. I love passing out rubberbands to full classes of students and allowing them to perform this experiment all at the same time.

Superconductivity is already a very impressive demonstration. The eddy currents generated do not weaken with time and cause a perfect magnetic repulsion by Faraday’s law.

But what most people do not show is that the superconductor is expelling out the magnetic field as the phase change occurs.

This is called the Meissner effect, and works best in type 1 superconductors, this YBCO is type 2, however the point is that superconductors are not merely perfect conductors. They are a completely new phase of matter, expellers of magnetic fields, perfect diamagnets.

The main difference between type one and type two is that some magnetic fields will penetrate type two even in the best conditions. Type one superconductors are generally naturally occurring metals such as lead and mercury. Their temperature must be much lower. 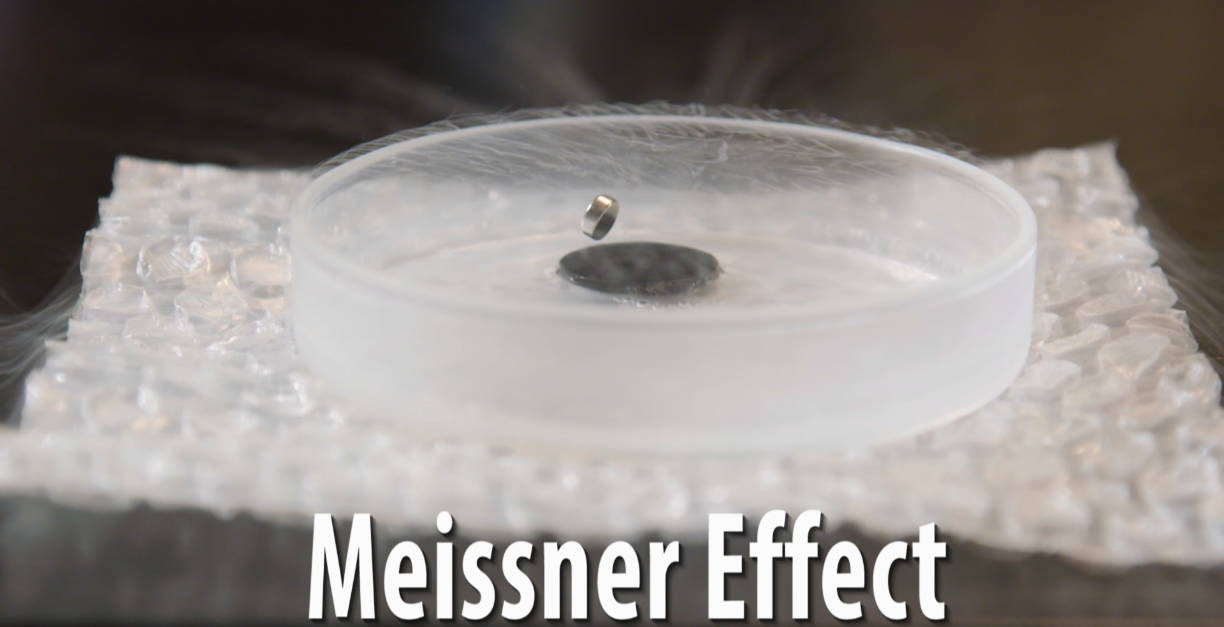 For a long time, I have used white paper to locate ultraviolet light. For example, the invisible lines of the mercury spectrum can be shown dramatically with this technique. Styrofoam doesn’t fluoresce, so it is good to compare the two to emphasize the situation.

Mercury is always a good choice because it puts out a lot of ultraviolet light. There are three types of UV light, and Mercury gives off all three. UVA, UVB, and UVC. Here they are listed from low to high energy. Generally, glass stops UVC and so most of the time this is no problem (the sun gives off UVC too but it is stopped by the atmosphere easily). UVA is the familiar blacklight, but it extends a bit beyond that where it becomes hazardous, and UVB is a middle range dangerous sunburn causing wavelength. A good sunblock is “broad spectrum” and will block both UVA and UVB.

But, how can we verify that sunblock actually works? My answer is to put it on paper under ultraviolet light.

The sunblock appears black when it is seen under a UV light. In this case I am using a black light. I often get this question, “what happens with regular moisturizing lotion?” When it comes to regular white lotion there will be no effect when compared to pretty much any sunblock. So far, every sunblock I have used has worked in this demonstration. I hope your students will be convinced that this stuff works and they should use it.

The focal distance in these mirrors is half the radius of the sphere they would be if they were more than just a section of a sphere. You can make this focal point visible by using fog in a can, outside on a sunny day.

Place a bit of dark construction paper at this point and it will immediately burst into flame! That is actually what the word focus means, it means fire. You will notice that I am not able to get a perfect focus from this mirror. That is due to spherical aberration; the best shape for a concave mirror is actually a paraboloid. However, I do believe that this is still a good enough focus to be doing these types of demonstrations. I have performed this demonstration with a real telescope mirror and I found that to be quite dangerous, and I do not recommend it! 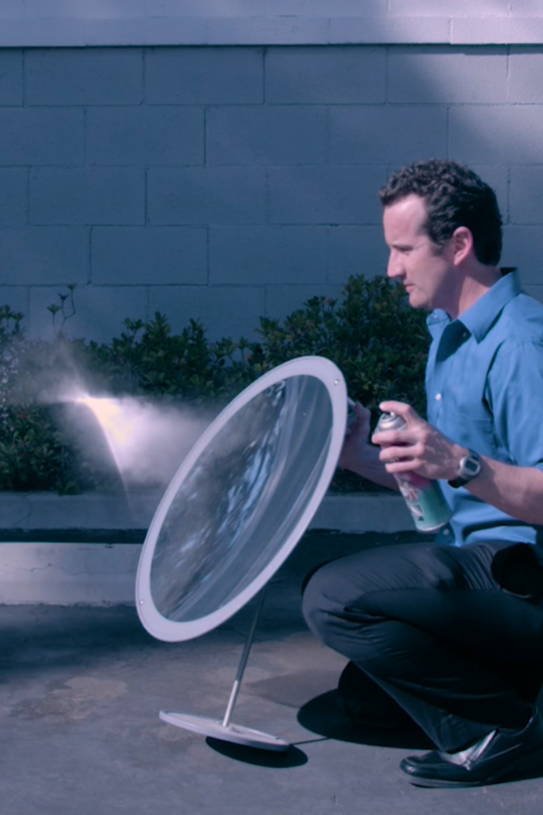 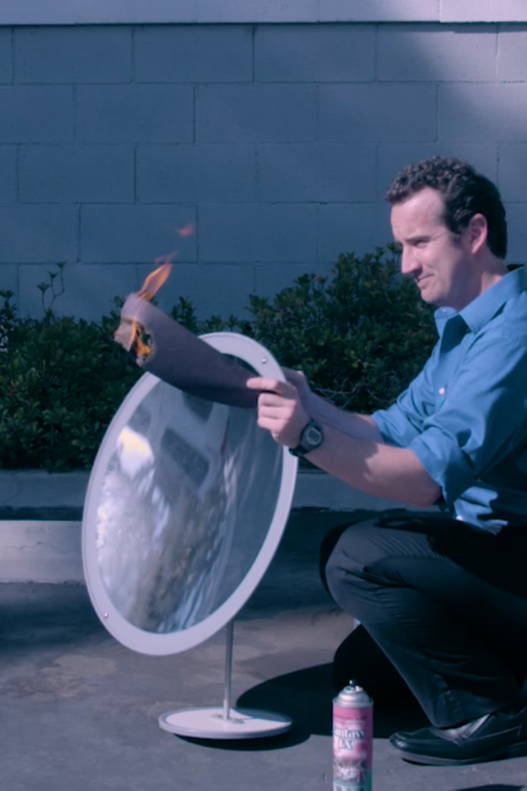